New White House Press Secretary Sarah Huckabee Sanders read a supportive letter from a nine-year old boy to President Donald Trump this week that has lit up the Internet.

In the handwritten note Huckabee read during her press briefing on Wednesday, a boy named Dylan told Trump he was his favorite president, the theme of his latest birthday bash, and also questioned why his critics seemed not to like him.

The young supporter standing by Trump — “Pickle” to his friends — also had other questions, including how how huge the White House is and Trump’s net worth. “Dylan, I’m not sure, but I know it’s a lot,” Sanders said in response.

Sanders let everyone know this may not be the last time she reads a letter from a child at the podium during a press briefing, saying the point is “to remind us a little bit more often about some of the forgotten men, women and children that we’re here to serve.”

As soon as Huckabee shared the letter on Twitter, the Internet immediately got down to the business of roasting it with takes that criticized the publicity move, took stabs at the President using the note — and some that found the note endearing.

Of course there were jokes about the writing.

Some tweets were more pointed.

One person wanted to know about the letter’s real estate in the White House kitchen.

There were follow-up questions. 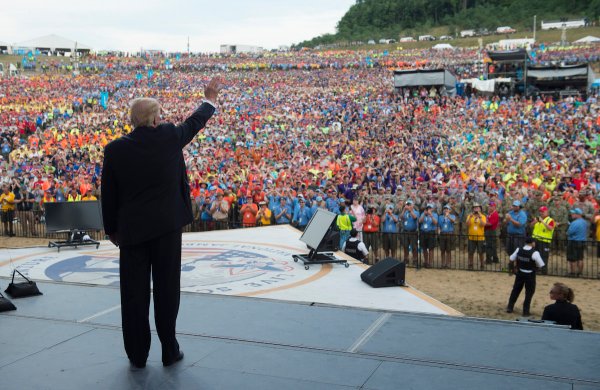 The History Behind President Trump's Speech to the Boy Scouts
Next Up: Editor's Pick