Louis Ferrante’s Discovery Channel series Inside the Gangsters’ Code fared pretty well when it first aired in 2013. How could it not? Its host was a former Gambino family mobster, who had spent years in maximum security prison before converting to Judaism, becoming an author, and sharing his experiences. In the show — which Ferrante, wrote, produced, and presented — the onetime hoodlum used his street credentials to gain superb access to imprisoned gang members around the world. Sensing that Ferrante, with his Mafia past, would understand their aspirations and fears more than a regular TV presenter, hardened thugs from El Salvador to Poland spoke to him with remarkable candor.

The episode set in Manila — in which Ferrante smoked a cigar with Jaybee Sebastian, the charismatic leader of a gang in New Bilibid Prison, just outside the Philippine capital — was compelling viewing. But it wasn’t until two years after its original airing that the episode began to generate intense interest in the country itself. This was around the time rumors started circulating that Rodrigo Duterte — then the mayor of Davao City and dubbed ‘The Punisher” for his extrajudicial war on crime there — was mulling a run at the presidency. “I began receiving hundreds of emails telling me that Duterte was ousting [incumbent president Benigno Aquino] based on the info in my doc,” Ferrante tells TIME.

In the hothouse atmosphere of Duterte’s law-and-order campaign, Ferrante’s footage was taken by the candidate’s supporters as proof that Sebastian, fellow members of the Commandos gang, and members of other prison gangs inside New Bilibid, were running vast drug dealing enterprises from behind bars and buying the cooperation of politicians and officials. The episode showed Sebastian and others scarcely living like prisoners. Instead, they were playing tennis and enjoying shops and restaurants all set up within the jail confines. Sebastian even had an air-conditioned clubhouse, where he hosted visitors to jazz recitals (he’s a competent saxophone player) and where he proudly displayed framed photographs of him posing with Aquino and then Justice Secretary Leila de Lima.

These images were drawn on by the Duterte camp to support the argument that the Philippines was a “narco state” that needed nothing short of a brutal war on pushers and drug users to save it. By March 2017, that war had claimed 7,000 lives, mostly of poor slum dwellers. When de Lima — who as justice secretary had investigated Duterte’s use of death squads in Davao City — opened a public inquiry into the killings, Duterte accused her of being in the pocket of New Bilibid drug lords, and alleged that their drug money had funded her senatorial campaign. He also claimed to be in possession of a sex tape featuring de Lima, who is still in jail on charges regarded by many as fabricated.

Ferrante then watched as the subjects of his documentary took center stage in the investigation into the senator. Several New Bilibid inmates swore they funneled money to her through the star witness: none other than Sebastian, who testified against de Lima a couple days after being stabbed in a supposed prison riot. She maintains that the testimonies against her were coerced.

In the middle of this, Ferrante’s show was screened in the Philippine Congress, and he was invited to the Philippines to take part in the investigation. “I couldn’t believe it,” he says, “[But] I’m sure it was more of a political play than an attempt to utilize my investigative skills.”

He recently spoke to TIME about the experience.

Few people outside of the Philippines had heard of New Bilibid Prison before your documentary. How much did you know about conditions inside before you arrived?

Very little. I knew it was a maximum security prison with 16,000 inmates but I deliberately neglected to study the prison beforehand so that my [on screen] reactions to discovering things would be natural and spontaneous. I did, however, have a clue that the prison was a world of its own behind those high walls. But I was still surprised from the very start when I found myself being escorted into the prison by uniformed men with billy clubs only to find out that they too were inmates. This meant that the prison policed itself to some degree which made sense, given the amount of inmates, but it was still startling.

How did the level of corruption you encountered at New Bilibid compare with situations you’ve seen in prisons in the U.S. and other countries. Did you feel like it was a unique case?

Not at all. As an inmate in U.S. prisons, I saw corruption everywhere. The majority of guards are ethical and are not open to bribes but inmates have a knack of sussing out who is susceptible. Regardless of how secure a prison is, we can never dispense with the human element at the heart of it all. People can be corrupted and it is the inmates’ job to figure out who is prone to corruption. A sad state of affairs but true nonetheless.

A lot of the support for the drug war rests on the idea that the Philippines has turned into a narco state. Did you get a sense of that while you were filming there?

It depends how you view it. If you visit a district in Manila like Tondo, then yes, it appears so. But there are nice places as well. Every nation on Earth shares a similar mixed landscape. I do believe it was an extraordinarily corrupt state which, among other things, allows criminal undertakings like drug dealing to flourish.

Tell me about the reaction your film got when it aired in the Philippines.

I was told early on that the film went viral in the Philippines and it made sense given the extraordinary amount of fan mail I’ve received from the country. The reaction has been incredibly positive as the people of the Philippines have credited my film with being the initial excavation of their dark underworld.

My glee was, however, soon transformed into gloom when I found out that Duterte had used the film as part of his bid to oust Aquino, lock up de Lima, and launch a string of vigilante murders of suspected criminals. I am a strong proponent of firm justice but feel that human rights should never be sacrificed in the name of justice. Even when the rule of law is applied, justice can be elusive. How tragic when it’s absent.

Were you following the investigation into Leila de Lima? What did you make of the whole thing?

Political trials are never a good thing. I recall reading that George Kennan, a former U.S. Ambassador to the Soviet Union, was witnessing Stalin’s political trials when he commented, “I’ve seen a lot of guilty people and these guys definitely look guilty to me.” We later found out that the trials were staged. If an intelligent and experienced diplomat like Kennan could be duped, how difficult is it for the rest of us to discern the truth in apolitical trial.

The [alleged sex tape featuring de Lima] sounded like part of a smear campaign. Whether a sex tape exists or not, I don’t believe one should ever be included in any judicial proceeding unless it is a crucial piece of the prosecution’s direct evidence or is entered by the defense as an alibi of some sort. Short of this, it’s a bullying tactic that has no place in a court of law.

As for Jaybee getting stabbed, I’m more surprised that he hasn’t been killed yet. His only chance at survival is to become a willing tool of the Duterte government. But that leaves him open to the wrath of prisoners. He’s stuck in a vice and regardless of whatever crimes he may have committed, I got to know him and I feel for him.

De Lima claimed Jaybee Sebastian was a government asset inside the prison. Do you think that’s conceivable?

It’s certainly conceivable but I’d be reluctant to commit without proof. I was, of course, surprised by his flaunted run of the prison. Without having some sense of government protection, he’d have otherwise been reluctant or adverse to participating in the film knowing that exposure of his power would likely result in its prompt removal by a higher power. Unless of course that higher power was protecting him, which certainly crossed my mind. Moreover, it is very difficult, if not impossible, to control a prison with 16,000 inmates without having assets on the inside. If he was an asset, he may have used his position to benefit other inmates. But we simply don’t know and mustn’t jump to judgment with so many facts clouded in the current climate.

What are your thoughts on Duterte’s effective sanctioning of extrajudicial killings as a way to enforce societal discipline? How similar or different is this to Mafia justice?

To answer the former part of your question, Goethe once said, that if he had to choose between the two, order is preferable to justice. It’s apparent that Duterte would concur with Goethe, and it appears he has the support of the Philippine people. As to the latter part of your question, Duterte’s justice is identical to Mob justice in which decisions are made in private and autonomously, the decree is final, and any murder is excusable on the grounds that it is sanctioned “for the good of the Mafia Family” — in this case, “for the good of the nation.”

The Philippine people are a beautiful people and deserved much better than what they had before Duterte, and they certainly deserve better than Duterte. At this point, we can only hope that he’s nothing more than a dose of strong medicine needed to address their immediate ills, but only needed for a short period, and they’ll soon toss him out or compel him to embrace the human rights that are so important for the overall health of any nation. 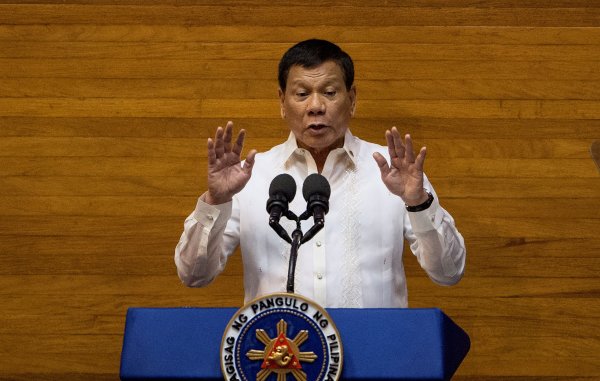