Some Doctors Now Say to Stop Antibiotics When You Feel Better

When you’re prescribed a course of antibiotics, it’s important to finish the whole thing. At least, that’s the message that’s been perpetuated for years by doctors, nurses, parents and the media. But now, a group of British doctors are making the case that in most cases, it’s time to drop the “complete the course” mantra, which they say could be doing more harm than good.

In a new analysis in the BMJ, health experts from Brighton and Sussex Medical School, the University of Oxford and other institutions say that the idea that cutting short a course of antibiotics will encourage drug resistance is not supported by evidence. In reality, they say, taking more antibiotics than needed does lead to resistance.

The statement in question “can be traced back to the dawn of the antibiotic era,” the authors wrote in their analysis. Alexander Fleming’s early work showed that sensitive bacteria could be “acclimatized” to penicillin, and in 1945, he spoke about a man who didn’t take enough of the drug and passed strep throat—now in a drug-resistant form—onto his wife, who died from the infection.

“If you use penicillin, use enough!” Fleming said at the time. But the authors point out that Streptococcus bacteria has never been shown to develop resistance to penicillin and that other early observations also remain unproven by modern research.

On the other hand, the researchers say, modern science has shown that unnecessary antibiotic use does contribute to the epidemic of drug-resistant bacteria. That includes antibiotics that are prescribed when they’re not needed at all (for viral illnesses, for example), as well as when they’re taken even after a patient feels better.

MORE: Bacteria Are More Threatening Than Ever

The researchers say that the directive to always finish antibiotics is incorrect and not evidence-based, and that new clinical trials should determine the best lengths of treatment for specific conditions and situations. Not only is the message potentially harmful, they write, but it “goes against one of the most fundamental and widespread medication beliefs people have, which is that we should take as little medication as necessary.”

Co-author Tim Peto, professor of clinical epidemiology at the University of Oxford, says there’s also no evidence that stopping antibiotics a few days early will cause a bad reaction or make a person seriously sick again. “It is always possible that shortening the duration of treatment can allow the infection to recur,” he said in an email, but “the evidence that does exist—although not very extensive—suggests it is safe to do this, and that any relapses that do occur are a nuisance rather than being dangerous.”

There are exceptions, the authors say, for some type of antibiotics that have been associated with spontaneous bacterial mutations—including those used to treat tuberculosis, gonorrhea and HIV.

But for most bacterial illnesses and the drugs prescribed for them, Peto and his colleagues say doctors and patients should use their best judgment. “I want to empower physicians today to advise patients individually when they can stop treatment—depending on how they respond to treatment and on their individual circumstances—rather than feel obligated to instruct patients to complete the course regardless of how they respond,” he says.

MORE: A Cautionary Tale About Antibiotics

Dr. Sharon Meropol, a pediatrician and epidemiologist at Case Western Reserve University School of Medicine, says she’s “glad someone finally wrote this paper,” and that she “mostly agrees” with the authors’ recommendations. For the vast majority of bacterial infections treated in an outpatient setting—typically respiratory and urinary tract infections—“patients should follow recommendations for dosing and frequency, but can stop when they feel better,” she says. (Meropol was not involved in the BMJ report.)

But Meropol, who is the principal investigator on a National Institutes of Public Health–funded study on antibiotic resistance in infants, believes those exceptions and caveats deserve greater emphasis. Certain bacterial and viral infections—those named in the paper, as well as cytomegalovirus infection in newborns—are treated with prolonged courses of antibiotics, she says, and it’s important to take those medications exactly as prescribed for as long as prescribed.

“In these types of infections, there is evidence that under-, incomplete- and interrupted treatment can contribute to persistent and/or resistant infection, complications of the disease, and/or increased risk of transmission of resistant organisms to others,” she says. “For this reason, patients should still follow their physicians’ advice on the duration of antibiotic therapy.” More research is needed to determine the safest strategies for antibiotic use, and when exactly they can and should be stopped. 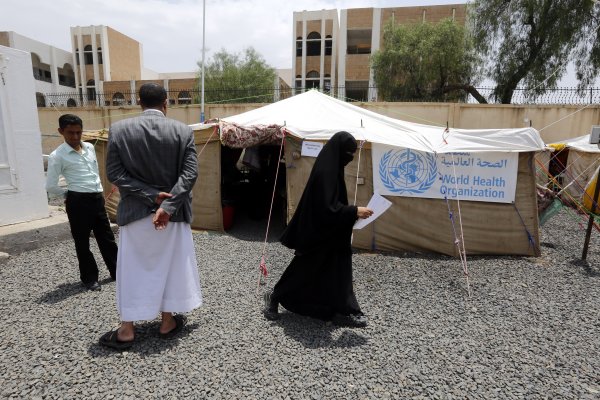 What to Know About the Massive Cholera Outbreak in Yemen
Next Up: Editor's Pick