Why the 'Goldwater Rule' Keeps Psychiatrists From Diagnosing at a Distance

On Tuesday, STAT magazine leaked an email that the American Psychoanalytic Association sent to members clarifying that it “does not consider political commentary by its individual members an ethical matter.” The document has been seen as permission to speculate about President Donald Trump’s mental health and a rebuke of the American Psychiatric Association’s 1973 “Goldwater Rule,” which prohibits that separate organization’s members from making such judgments about individuals they haven’t personally evaluated — a rule for which the organization reaffirmed its support in March of 2017.

While Trump is already in office, the rule was actually a response to unscientific speculation about whether a Republican presidential candidate was up to the job in the first place — which led to a high-profile lawsuit.

When Arizona Senator Barry Goldwater ran for president in 1964, a damning May 1964 Good Housekeeping feature came out—and a Dec. 1959 Pageant magazine resurfaced—both alleging that Goldwater’s wife and other family members said he had suffered two nervous breakdowns from burnout, or “overwork” in the 1930s. Goldwater’s mental health was a talking point in the election, thanks to his drastic stance on nuclear weapons — he said the U.S. should “lob one into the men’s room at the Kremlin,” and suggested giving NATO field commanders more discretion about when to use them. Such comments inspired the famous “Daisy” ad, as well as a parody of his “In your heart, you know he’s right” slogan: “In your guts, you know he’s nuts.”

And, about a month before the 1964 presidential election, a special issue of the now-defunct Fact magazine came out, boasting the cover line, “1,189 PSYCHIATRISTS SAY GOLDWATER IS PSYCHOLOGICALLY UNFIT TO BE PRESIDENT!” (Ads for the issue also appeared in the New York Times, Philadelphia Inquirer and San Francisco News-Call Bulletin.)

That number came from a survey in which the magazine’s publisher, Ralph Ginzburg, had asked 12,356 psychiatrists one question: “Do you believe Barry Goldwater is psychologically fit to serve as President of the United States?”

He got 2,417 responses, in which 657 thought he was fit, and 571 wouldn’t take a position. Two-thirds were willing to have their names printed alongside their responses, such as Dr. Randolph Leigh Jr. of Cincinnati who thought that Goldwater’s “public utterances strongly suggest the megalomania of a paranoid personality.” TIME quoted some of the survey’s most memorable answers as such: “’emotionally unstable,’ ‘immature,’ ‘cowardly,’ ‘grossly psychotic,’ “paranoid,” “mass murderer,’ ‘amoral and immoral,’ ‘chronic schizophrenic’ and ‘dangerous lunatic.’ One psychiatrist even felt that a proposed Goldwater visit to Hitler’s Berchtesgaden ‘is enough to convince me of his strong identification with the authoritarianism of Hitler, if not identification with Hitler himself.'” (You can read the full article from Fact here).

Ginzburg also cited past TIME articles on Goldwater at several points to help make the case that Goldwater wasn’t up for the job.

He claimed the troubles started in childhood. “Those psychoanalysts who find a connection between sadism and an anal character will not be surprised that bathrooms seemed to fascinate young Goldwater,” Ginzburg wrote, citing a tidbit from TIME’s June 23, 1961, cover story on the increasingly popular Senator about how as a young boy he built his own radio transmitter and “wired everything in sight, from toilet seats to his bed headboard.” Ginzburg suggested Goldwater was too mean to serve, quoting from TIME about how he “shipped live mice through the pneumatic tube system to the secretarial pool” at his former job as a department store bigwig. And he framed Goldwater as a man who gets tired too easily by quoting TIME’s May 15, 1964, feature “Down in the Dumps,” which reported that the campaign was getting on Goldwater’s “nerves” and quoted one of his aides as saying, “You know, he’s always had a hot temper, and we used to joke about the day he’d punch some fresh jerk in the mouth. Let me tell you that in the past month or so it’s ceased to be a joke.”

In 1973, the American Psychiatric Association spelled out what’s now called the “Goldwater rule” in the first edition of its Code of Ethics:

More than 40 years later, though, some top mental health professionals claim it is their “duty to warn” the public about the mental health of those in power — but others argue there’s no point diagnosing from afar when someone could do it on site: Rep. Ted Lieu and the American Mental Health Foundation have discussed proposing legislation that would establish a “Presidential Psychiatrist” within the White House’s medical unit. 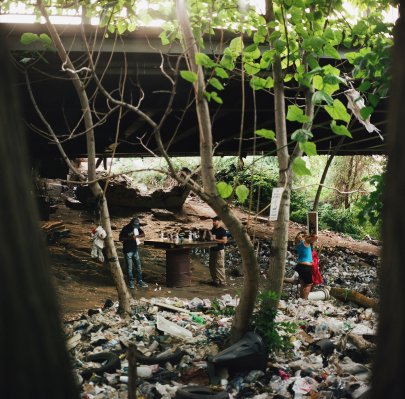 Inside A Notorious Philadelphia Drug Market Before It Gets Shut Down
Next Up: Editor's Pick