Review: Full of Feral Grace, Atomic Blonde Kicks You Where It Hurts

If you’ve watched a lot of violent action movies, you may have seen the old knife-in-forehead trick or its subtler cousin, the cheek key-jab. But you’ve never seen those moves in a picture that stars Charlize Theron, the tall drink of gunpowder that gives Atomic Blonde its mighty kick. She plays slinky MI6 agent Lorraine Broughton, who is sent to Berlin to retrieve sensitive information just as the Wall is about to come down. There she links up with fellow operative Percival (James McAvoy), a loose cannon with a thug’s bristly haircut and a side business selling black-market Jack Daniel’s. Their mission: to spirit a Stasi turncoat to safety. (He’s played by Eddie Marsan, whose eyes radiate the innocence of a baby dormouse.)

Something goes wrong. We know that from the start because the story’s framing device shows Broughton—bruised and scratched from some as-yet-unseen battles—being grilled by two humorless interrogators, played with deadpan pomposity by John Goodman and Toby Jones. Adapted from Antony Johnston’s graphic novel The Coldest City, this film is basically a tour of crushed ribs, cracked skulls and busted femurs. Its plot is tangled and mildly nonsensical. Director David Leitch (John Wick), a longtime stunt man, may not be the most meticulous storyteller, but he knows how to direct a bold and brutal action sequence. The picture’s showpiece is a wild hand-to-hand combat sequence that goes on for minutes in one unbroken take, a savage ballet in which Broughton fends off baddies with feral grace but also takes more than a few roundhouse kicks and body slams herself.

MORE: How Charlize Theron Invents a New Kind of Badass in the Stylish Atomic Blonde

That’s the key to Theron’s performance: as tough and cool as her Broughton is, she’s not soulless. It hurts to see her take a punch. But oh, how good it feels to see her throw one! Theron is all limbs, standing tall in a wicked assortment of stilettos and narrow, svelte trousers. When she moves, every muscle is in tune with the picture’s robust, new-wavey soundtrack (which makes fine use of, among other songs, David Bowie’s ominously seductive “Cat People”). When she takes a smooth drag on a cigarette, that sound you hear rustling across the earth’s surface is the collective swoon of 50 million ex-smokers.

Glowering from beneath the bangs of her moonbeam-platinum bob, Theron’s Broughton is equal parts air, light and iron. We’re just the moths clustering around her flame. 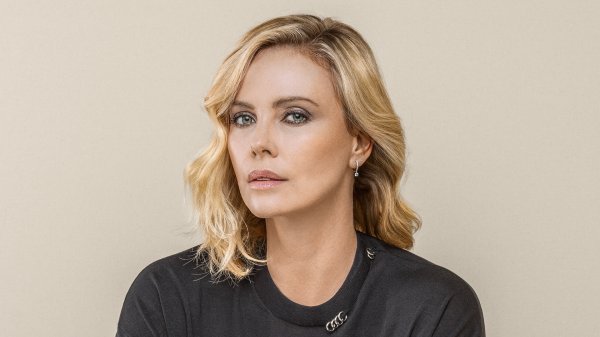 How Charlize Theron Invents a New Kind of Badass in the Stylish Atomic Blonde
Next Up: Editor's Pick