When President Donald Trump stopped by the Boy Scouts of America Jamboree yesterday, the speech he delivered served as the inspiration for a brand new ghost story from Stephen Colbert.

On the Tuesday night episode of The Late Show, Colbert gathered a few volunteer Boy Scouts around the campfire for a frightening tale of “The Old Bloated Pumpkin Man” who “haunted” their jamboree.

Colbert, who also addressed Trump’s speech in his monologue, aired a sketch featuring troop leader who decides to scare his scouts with a new ghost story—swapping Bigfoot in favor of a much more frightening tale about “Big Foot-in-Mouth.”

Lit by the light of a faux campfire, he tells about the man “with hair like moldy hay” who promised not to talk about politics in front of the Boy Scouts and then did anyway. “Did they understand him?” asks one Scout. “No,” replies their leader. “They were confused.”

That wasn’t the truly scary part of the story, though. No spoilers! Instead, watch the video—if you dare. 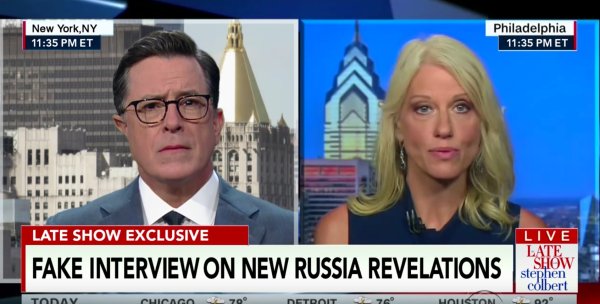 'Like Staring Into the Mouth of Madness.' Stephen Colbert 'Interviewed' Kellyanne Conway About Donald Trump Jr. and Russia
Next Up: Editor's Pick