On Wednesday morning, Trump tweeted that the U.S. military would no longer “allow or accept” any transgender person to serve in any capacity, though the exact details of how the policy would work have not yet been publicly revealed.

Groups representing LGBT Americans quickly fired back, arguing that the policy was unnecessary, given that studies have shown the impact on military readiness and overall medical costs are minimal.

“Today Donald Trump has proven himself as unpatriotic as he is unfit to serve as Commander in Chief,” Chad Griffin, president of the Human Rights Campaign, said in a statement. “He has put a target on the backs of the more than 15,000 transgender troops proudly serving in our military.”

Estimates on the number of transgender troops differ. A RAND Corporation study estimated 1,320 to 6,630 transgender people actively serve in the U.S. military and some 1,510 are in the selected reserve. A 2014 study from the Williams Institute estimates that number is a bit higher with more than 15,000 active transgender service-members and 134,000 veterans.

“This is an outrageous and desperate action. The thousands of transgender service members serving on the front lines for this country deserve better than a commander-in-chief who rejects their basic humanity,” said Joshua Block, an attorney at the American Civil Liberties Union. “The president is trying to score cheap political points on the backs of military personnel who have put their lives on the line for their country.”

The decision follows Defense Secretary Jim Mattis’ call for an six-month delay in allowing those who identify as transgender to enlist in the U.S. military, a decision he said would allow the officials to determine what impact transgender service-members have on readiness, the Associated Press reported.

While trans individuals who were already serving in the military have been allowed to seek medical treatment and change their gender identity in official records since Oct. 1, there was a delay in the acceptance of new transgender troops.

Making medical treatments available to active service-members would increase military medical costs by between $2.4 and $8.4 million per year, the RAND study found. That would represent a 0.04-0.13% increase in health care costs for active duty servicemembers.

The National Center for Transgender Equality said Wednesday’s announcement was worse than “Don’t Ask, Don’t Tell,” a Clinton Administration policy that blocked gay, lesbian, and bisexual Americans from openly serving in the armed forces until it was repealed in 2011.

“This is don’t serve, don’t serve,” said the Center’s executive director Mara Keisling. “It is about bigotry rather than military readiness, reason or science.”

Kris Hayashi, executive director of the Transgender Law Center, argued the policy is part of broader attacks on marginalized communities by he Trump Administration.

“This is really, sadly just one of his attacks on our community,” Hayashi told TIME. “We have been clear at the Transgender Law Center that we will not waver in our organizing and our legal resistance to his agenda. This is just one more sign that he will do everything in his power to harm us and to harm other communities in this country.” 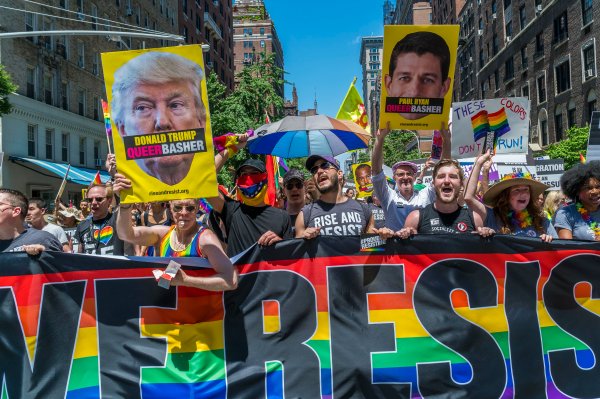