A British couple traveling to the U.S. for their honeymoon have said that they were detained without explanation for more than a day at Los Angeles International Airport before being denied entry and sent back to the U.K.

Londoner Natasha Politakis told the Guardian that her husband Ali Gul had obtained a U.S. visa valid for ten years before they departed for their roughly $9,000 holiday to Hawaii. Gul, who is of Turkish Muslim origin, had previously been turned down for a visa for an earlier trip to the U.S. Gul was born in Turkey but was traveling on a British passport.

“It was for no reason,” Politakis told the newspaper. “We tried to talk to the embassy but they said just go on the website and there was no explanation there. We had visas, we had everything. We were treated like criminals.”

After their 26-hour ordeal, Politakis said they would not travel the U.S. again: “I’m too scared now, after what happened. I’ve never been in trouble or anything before. All our friends and family are shocked.”

The couple ultimately decided to spend their honeymoon in Mexico instead.

The U.S. embassy declined to comment on the case but said there were “more than 60 grounds of inadmissibility divided into several major categories, including health-related, prior criminal convictions, security reasons, public charge, labor certification, illegal entrants and immigration violations, documentation requirements, and miscellaneous grounds.” 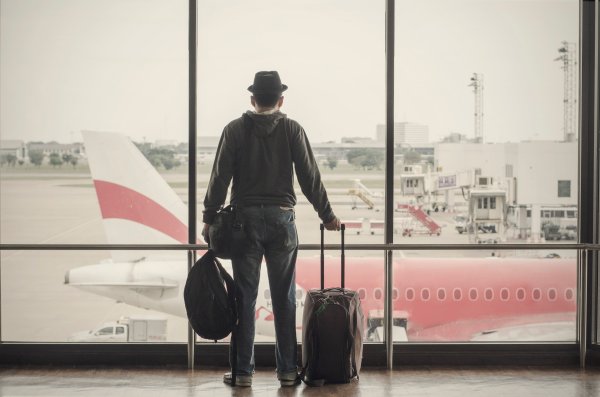 This Man Will Trade His First Class Seat With You If You Find Him at the Airport
Next Up: Editor's Pick