Barry Goldwater wasn’t crazy. He was exceedingly conservative by the standards of his time—and that sometimes got him into trouble. In 1964, when he was running for the Republican presidential nomination, he suggested that maybe it wouldn’t be a terrible strategy to use just a few of the atomic bombs in the U.S. arsenal to defoliate forests in North Vietnam and give Americans a fighting edge. Was that extreme? Sure. Crazy? No. And, in the face of furious blowback, Goldwater was smart and sane enough to walk back his very bad idea.

That, however, didn’t stop the ironically named Fact magazine from running a sensational story with the provocative headline, “1,189 Psychiatrists Say Goldwater is Psychologically Unfit to Be President!” The story was junk: A questionnaire had been sent to 12,356 psychiatrists, nearly 10,000 of whom had simply ignored it. Of the 2,417 who did respond, a majority of 1,228 pronounced then-Senator Goldwater perfectly sane. The minority said he wasn’t — and the minority got the headline. Goldwater, who went on to win the GOP nomination only to get trounced by Lyndon Johnson, later sued the editor of Fact for libel, and he won. In 1973, the American Psychiatric Association (APA) responded by adopting what it straightforwardly called the Goldwater Rule, forbidding members from offering a diagnosis of a public figure they have not themselves examined — and even then, not without that person’s consent.

But that was then. And then was before the age of Donald Trump. It was before the early-morning tweetstorms, before the febrile conspiracy theories, before the grandiosity and impulsiveness and the serial counter-factualism. It was before, in short, Americans made a man who at least appears unstable to a great many observers the most powerful person in the world. That has led a lot of people to argue that we may have over-learned the lesson of the Goldwater Rule and that it’s time to scrap or at least suspend it.

That is precisely the position another professional group, the American Psychoanalytic Association (APsaA), has now taken. In an internal email, the association urged its 3,500 members to speak their minds on the matter of presidential mental health, and if they consider Trump unwell, to say so. According to the health and medicine website STAT, some members of the group have gone so far as to conclude that not only is it alright to weigh in on the matter of Presidential sanity, but that doctors have an affirmative “duty to warn.”

In an email to TIME, the APsaA stressed that it is not suggesting that its members “defy” the Goldwater Rule—especially since it is not their rule to begin with. In its official guidelines on public figures, the organization instead urges members to “avoid the appearance of ‘wild analysis,'” to avoid overstepping “the bounds of psychoanalytic knowledge” and generally to comment with extreme care. The American Psychiatric Association quickly made clear it stands by the Goldwater Rule.

By way of disclosure, more than three years ago, I opened my book, The Narcissist Next Door, with five pages devoted to Trump. It was not a diagnosis — I’m not a clinician — but it was a description, and I continue to believe it’s a good one. I also believe the psychoanalytic group is right to take the muzzle off its members.

Consider first that we live in a far more psychologically savvy era than we did even 30 years ago, to say nothing of half-a-century back in the Goldwater years. During the 1988 Presidential campaign, Michael Dukakis took a lot of heat from the GOP over the fact that he had sought psychological counseling after the 1973 death of his brother. Would voters care if a grieving sibling — presidential nominee or not — sought such help today? Not likely. America hasn’t necessarily gotten more compassionate, but we have gotten smarter, and we have a better understanding of the difference between routine mental health problems and a truly debilitating psychopathy. If the President — any President — exhibits signs of clinical illness, we’re better able to weigh the evidence and understand the implications.

What’s more, it doesn’t take professional training or particular insight to recognize that certain human behaviors are psychic red flags. If you can’t eat a meal without first washing your hands until they bleed, it would be fair for your family to suspect that you just might have OCD. If you can’t have a single drink without then having 15 more, it doesn’t take a clinician to suggest that you may — may — be an alcoholic. Presidents have exhibited worrisome behavior before: Johnson’s exhibitionism, Richard Nixon’s seeming paranoia. But they projected a fundamental groundedness too, a basic understanding that certain actions would lead to certain results, and an ability to pursue desired ends in a linear and disciplined way.

Finally, the Goldwater Rule, while masquerading as enlightened, actually betrays an outdated divide between physical and mental health. If President Dwight Eisenhower, who at one time had been a four-pack-a-day smoker, had shown any outward symptoms of cardiovascular disease before his 1955 heart attack, it’s unlikely anyone would have been reluctant to ask whether the 60-year-old veteran of a World War was up to campaigning for reelection. Certainly no one was reluctant after he did get sick. So why stay decorously silent when behavioral symptoms are just as obvious?

It’s indeed impossible for anyone but a professional who is treating Trump to say with certainty what his clinical diagnosis is — if any. But when the mental health of one man can have such a profound impact on the lives of 323 million Americans — to say nothing of the 7.5 billion people living on the planet as a whole — it’s irresponsible to not at least have the conversation. And it’s a dereliction for the people who know the most — the doctors — not to lead it. 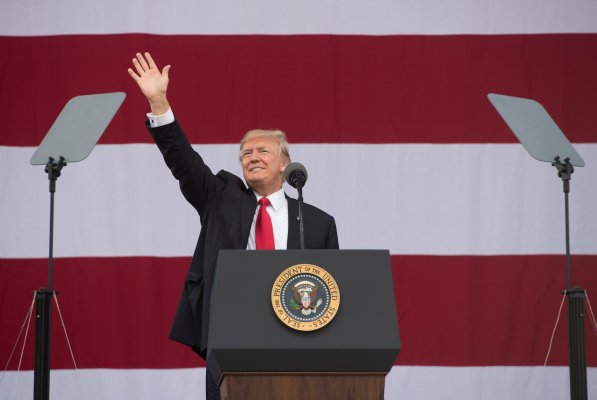 Psychiatrists Disagree Over Whether They Should Discuss Trump’s Mental Health
Next Up: Editor's Pick