Trump claimed Ukraine tried to “sabotage” his campaign, “quietly working to boost Clinton,” in another tweet on Tuesday. “So where is the investigation A.G. @seanhannity,” Trump tweeted. He included the Twitter handle for Fox News host Sean Hannity, one of Trump’s most vocal supporters, who often points to alleged scandals involving Hillary Clinton on his show.

Trump also tweeted that acting FBI Director Andrew McCabe, who would be responsible for continuing any of the investigation into Clinton and who took over the position after Trump’s sudden decision to fire former FBI Director James Comey, would do so with bias because of his connection to the Clintons. Trump suggested Clinton herself donated money to the 2015 Va. state senate campaign of McCabe’s wife, Jill McCabe. However, it was a political group associated with Va. Gov. Terry McAuliffe, a longtime friend of the Clintons, that donated almost $500,000 to the campaign, according to the Wall Street Journal.

Trump publicly condemned Sessions in an interview with the New York Times last week for recusing himself from the investigation into Russian interference in the 2016 U.S. election. In the interview, Trump said he would not have chosen Sessions for the top position in the Justice Department if he had known Sessions would recuse himself.

Trump continued his criticism on Monday when he called Sessions “beleaguered” in a tweet that questioned why the attorney general was not investigating alleged “crimes” committed by Clinton. Trump also rolled his eyes and smirked when a reporter asked if Sessions should resign.

A spokesperson from the Justice Department has not responded to a request for comment. Last week, Sessions said he would not resign and continue his role “as long as that is appropriate.” 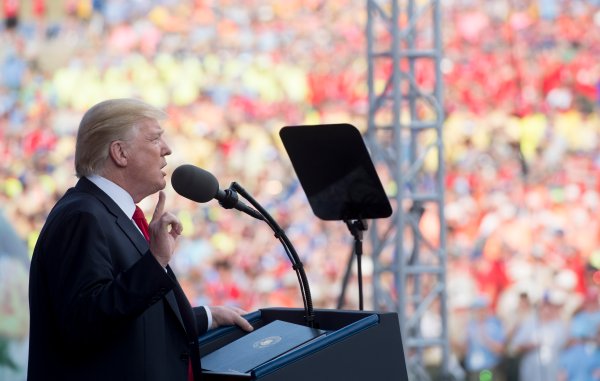