There Are Thousands of Human Trafficking Victims Each Year. Here's How You Can Help

San Antonio police officers investigate the scene where eight people were found dead in a tractor-trailer loaded with at least 30 others outside a Walmart store in stifling summer heat in what police are calling a horrific human trafficking case, on July 23, 2017, in San Antonio.
Eric Gay—AP
By Melissa Chan

Thousands of people fall victim to human trafficking across the globe each year, and the number of reported cases in the U.S. is on the rise, human rights groups say.

The Department of Homeland Security (DHS) considers human trafficking, in which people are forced into labor or sex, a form of modern-day slavery as well as a multinational, multibillion-dollar industry. A related problem is smuggling, which is the illegal importation of people into the country. Officials say it’s not uncommon for smuggling to lead to trafficking. Some of the victims pay to be transported illegally into the U.S. only to later be held against their will, according to the U.S. Immigration and Customs Enforcement (ICE).

The latest smuggling tragedy occurred over the weekend when authorities in Texas found a tractor-trailer at a Walmart parking lot packed with more than two-dozen immigrants. Eight bodies were found in the truck and two other victims later died at a hospital. The passengers took turns breathing through a hole in the truck, according to the Associated Press.

“We can only imagine how frightening and painful their lives must have been at the end,” said Jean Bruggeman, executive director of Freedom Network USA, an anti-trafficking organization that works with trafficking survivors. “They’re literally trapped within this truck at a time when they’re watching others around them suffer so greatly.”

It’s unclear how many human trafficking victims there are in the U.S., since many incidents go unreported. Traffickers often exploit victims’ fear of being deported, which makes the crime harder to track, DHS said.

Polaris, an advocacy group that has managed the National Human Trafficking Hotline since 2007, said more than 33,000 cases across the country have been reported in the last nine years. The hotline took in a record 8,042 reports in 2016 from victims and members of the public with tips, which is roughly a 35% jump from 2015.

The majority of the reports came from people who observed potential instances of trafficking, according to Vanessa Chauhan, a strategic engagement adviser at Polaris, which works with DHS in tackling the issue. “Even one person’s information, whether or not that person knows it to be a definite case, could potentially save one life or multiple lives,” she said. “It’s so important. There are no repercussions. You’re just calling in.”

“It’s a hidden crime and unless you’re looking for it, you’re not going to find it,” she added.

DHS, which aims to spread awareness of human trafficking through its Blue Campaign, said victims tend to appear disconnected from family, friends and community groups, including churches and schools. They also tend to look scared or submissive. Other key indicators are bruises or other signs of abuse and signs of being denied food, water, sleep or medical care. A victim could also be accompanied by someone who seems to be in control. In that case, experts say to look for signs that the victim appears to have been coached on what to say.

Victims and tipsters can call the National Human Trafficking Hotline at 1 (888) 373-7888 or text HELP or INFO to “BeFree” or 233733. All calls can be made anonymously. Reports can also be submitted through the hotline’s online form here. If a victim is in immediate danger, authorities urge people to call 911. Concerned citizens should not confront a suspected trafficker or alert a victim to any suspicions, experts say. 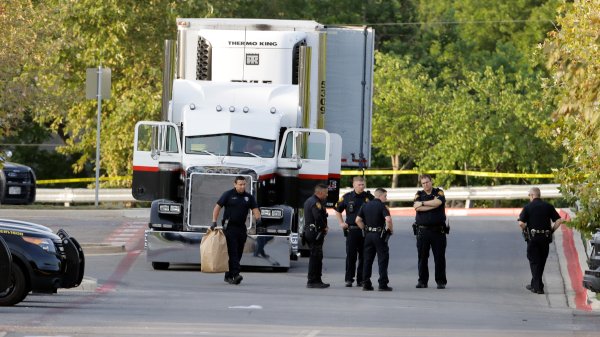 Florida Man Facing Charges After 8 Found Dead in Tractor-Trailer
Next Up: Editor's Pick