Regular Pap tests and the HPV vaccine have helped lower rates of the disease, yet more than 12,000 women are expected to be diagnosed with it in the U.S. this year. If you notice any of these cervical cancer signs, check in with your doctor.

Symptoms to look out for

Consider all the strides that have been made fighting cervical cancer, you might think it’s a disease you don’t have to be worry about as much anymore. Decades ago, it was one of the major killers of women of childbearing age in the United States, according to theNational Institutes of Health.

But thanks to the development of the Pap test—the simple test that detects abnormal cervical cells before cancer develops—cervical cancer is now much less common. In fact, since Pap tests became a routine part of an ob-gyn checkup, the death rate from cervical cancer has plummeted by 50 percent, the American Cancer Society reports. (Though mortality rates are likely underestimated for some groups of women, like African Americans, reported a 2017 study in the journal Cancer.)

Another game changer was the discovery of HPV, or human papillomavirus, as the cause of cervical cancer. We now know that “over 99 percent of cervical cancers are caused by a persistent HPV infection,” says Mahboobeh Safaeian, PhD, MPH, director of clinical science, HPV, for Roche Molecular Systems. This has lead to “very good prevention measures, including vaccines and HPV testing that detects treatable pre-cancer,” she says.

RELATED: What to Do if You Have a Cancer Scare

Yet even with these advances, cervical cancer remains a serious threat to your health. More than 12,000 women will be diagnosed with it this year, and about 4,000 will die from it. That’s why, in addition to preventing the disease through HPV vaccination and regular HPV and Pap tests, it’s smart to be on the lookout for the symptoms of cervical cancer—which are often hard to spot. Read on for the 9 tip-offs every woman needs to be aware of.

You have no symptoms at all

Cervical cancer is called a silent killer for a reason. “Early cervical cancer is confined to the internal part of the cervix,” explains Dallas Reed, MD, an ob-gyn and medical geneticist at Tufts Medical Center in Boston. (Anatomy refresher: the cervix is the narrow channel that forms the lower end of the uterus.) As a result, there’s often no detectable clue that cancer cells are present.

“Most women don’t experience symptoms until they develop a very advanced form of the disease,” explains Sarah Feldman, MD, MPH, ob-gyn and associate professor at Harvard Medical School. Sadly, by this time, the disease is more likely to be fatal. The 5-year survival rate for women with stage 1 cervical cancer is as high as 93%; for stage 4, it sinks to about 15%, according to the ACS. “It’s important to avoid getting to that point,” says Dr. Feldman.

You can do that by getting regular paps and HPV tests. The general guideline: starting at age 21, women under 30 should undergo a Pap test every three years; beginning at age 30, women should get a pap test along with an HPV test every five years, according to the ACS.

Your periods are heavier or last longer

Maybe you’re bleeding a lot more during your period, or just a little more than usual. Or you’re spotting between cycles, or your flow seems to last longer than you’re used to. The increase could be caused by cancerous lesions on your cervix, says Dr. Reed.

Here’s what happens: As cervical cancer develops, the cancer erodes tissues and blood vessels. That leaves them exposed, which can make bleeding very severe, Dr. Reed adds. Still, as scary as it can seem, abnormal bleeding is not a telltale sign of cancer. Although your doctor will want to rule out cervical cancer, she’ll also consider polyps in your cervix, fibroids, and even pregnancy.

Your vaginal discharge is different

You’re used to the ebb and flow of vaginal discharge over the course of the month; sometimes it’s heavier, lighter, off-white, or clear. But a change in the amount or scent of your discharge that can’t be attributed to a yeast infection or other vaginal infection might be a sign of cervical cancer.

“If there is something disrupting the normal homeostasis of the cervix,” says Dr. Reed, “you may see changes in discharge.” In addition to a different amount or odor, watch for changes in texture, such as more watery discharge, or it’s become itchy. These aren’t certain signs of cervical cancer, but you should alet your ob-gyn and play it safe.

A cervical cancer mass that is more advanced can impinge on the nerves in your pelvis, resulting in pelvicpain during sex—or sometimes even in everyday situations.

So if intercourse used to be pleasurable and all of a sudden you’re feeling discomfort or pain, and it’s not a lubrication issue, let your ob-gyn know. It’s not a definitive cervical cancer sign (endometriosis can also cause painful sex, as can other benign conditions such as fibroids). But it is your body’s way of telling you something’s off.

You’re bleeding during or after sex

Sex that hurts isn’t the only intercourse-related cervical cancer clue. “There’s an increased vasculature associated with cervical abnormalities,” says Dr. Feldman. This means there are more blood vessels in the cervix when a malignancy is present compared to a normal, healthy cervix.

When you have sex, your partner’s penis can disrupt those blood vessels. The result: spotting on your sheets after a roll in the hay.

“If you bleed after sex, you should definitely get it checked out,” she advises. A doctor might first think of an infection or STD, both of which can cause vaginal inflammation. That said, “a doctor will always want to rule out cervical cancer or abnormal cells in the cervix,” she says, so let yours do that.

You’re probably very familiar with the signs of a urinary tract infection, but if you’re experiencing these symptoms often or they aren’t cleared up by a course of antibiotics, tell your ob-gyn; it could signal cervical cancer.

Here’s how: A cervical cancer tumor can grow into body tissues surrounding the cervix. If it spreads to your bladder nearby, you may experience pain while peeing or a sudden need to run to the loo all the time, says Dr. Feldman.

You feel run down

You’re tired all the time despite getting what seems like enough sleep, or your head feels fuzzy and unfocused, and you’re not sure why. It may be general fatigue, or it may be anemia that’s causing your exhaustion.

This condition caused by insufficient production of oxygen-carrying red blood cells is found in 30 percent of cervical cancer patients. Bleeding from a tumor can cause excess blood loss, which leads to anemia.

“Both fatigue and anemia can happen with any chronic condition, including cancer,” says Dr. Reed. “The longer the condition lasts, the more likely it may be that someone feels fatigued,” she says. Anemia is something to pay attention to, as it may be a sign of a more aggressive tumor, notes a 2014 study.

Your leg is swollen

Swelling in your leg and cervical cancer might not seem connected in any way, but this symptom is something women with cervical cancer typically only experience in advanced stages of the disease, says Dr. Reed.

It happens “when the cervical cancer is pressing on nerves or blood vessels in the pelvis that supply the legs,” she explains. The result is a buildup of fluid that may appear as a single, swollen leg. Again, it’s not common, but it is something to be aware of.

You’re constipated and can’t figure out why

If the cancer has spread laterally, it can interfere with nerves, potentially leading to constipation or other GI problems if the cancer grows into the rectum.

“It’s not always your cervix that’s causing the problem,” says Dr. Reed. Both of these issues appear in later stages, so you don’t have to worry that a random bout of bloating or constipation means you have cervical cancer. That said, like all of these signs, it’s always a good idea to heed the clues your body is sending you and check in with a doctor. 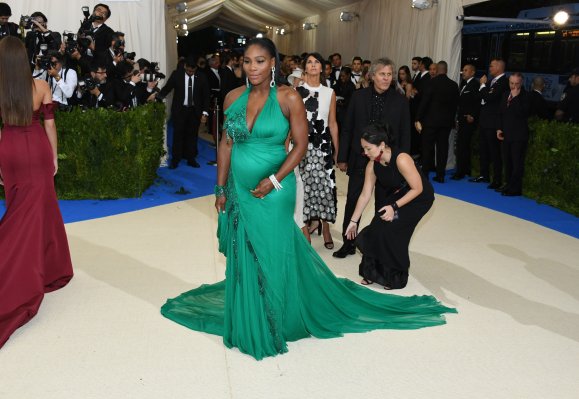