This photo taken on July 22, 2017 shows Philippine Marines taking cover from sniper fire while on patrol at the frontline in Marawi.
Ted Aljibe—AFP/Getty Images
By Joseph Hincks

Philippine President Rodrigo Duterte said Friday that he is prepared to wait for another year to retake the city of Marawi, parts of which remain occupied by an ad-hoc coalition of Islamist militants, two months after their brazen assault on the southern city.

Officially the death toll in Marawi has now topped 500, including 45 civilians and 114 government troops, the Philippine Daily Inquirer reports. However as far back as mid-June residents who had fled the city, and a senior army official who declined to be named, separately told TIME they estimated more than 1000 people had been killed.

Despite a sustained ground assault and daily airstrikes — footage from Sunday’s fighting shows buildings in flames — an estimated 70 militants are thought to still be holed up in Marawi.

According to Duterte, the presence of hostages is checking military clearing operations. “I told them ‘do not attack.’ What’s important is we do not want to kill people,” he said Friday. “If we have to wait there for one year, let us wait for one year.”

Duterte’s latest comments — and the elapsing of several self-imposed deadlines to clear the city — add to a growing unease at the Philippines ability to resolve or even contain the Marawi crisis. Government officials in Singapore, Indonesia and elsewhere have expressed fears that Mindanao could become a new hub for ISIS in Southeast Asia and the siege has already inspired violence elsewhere in the region.

Read more: Militants Storm a Southern Philippine Village as the Battle for Nearby Marawi Continues

On Saturday, Philippine lawmakers approved Duterte’s request to retain martial law in Mindanao until the end of the year. But the following day, one of the city’s holdouts appeared to post a taunt on the encrypted messenger app Telegram.

“Even if you extend until December your Offensive against us, We won’t run out of ammunition and food,” said a user signing off as “Semion Almujaheed.” The account was declared authentic by the Jakarta-based Institute for Policy Analysis (IPAC).

“Our ammunition is stockpiling because whenever the Philippine Soldiers run (abandon their positions) and those killed in battle, the tendency is they leave behind their weapons and ammunitions,” the user added.

Richard Heydarian, assistant professor of political science at Manila’s De La Salle University, tells TIME that Duterte’s comments are intended to temper public expectations given that the Marawi attack masterminds Isnilon Hapilon and the Maute brothers appear to be still eluding authorities. The crisis, he says, has exposed the operational vulnerabilities of the Philippine military.

“The ISIS affiliates in Mindanao are using cutting edge terror and insurgency tactics which hammered coalition forces in Iraq, Syria and Afghanistan in [the] past decade.”

Research by IPAC, collated in a report published last week, shows that the Marawi operation received direct financing from ISIS central. It also shows a chain of command between Syria and Marawi with a Malaysian professor dispatching jihadis and laundered money to the city. Of scores of foreign fighters that traveled to the Philippines to fight, about 20 are thought to be Indonesians.

IPAC director Sidney Jones said it seemed unlikely that the militants could hold out for a year, but regardless, the government needed to be thinking beyond Marawi. Among other measures, the Philippines should investigate how pro-ISIS elements were recruited so that effective interventions can be designed. It should also be working to ensure that evacuation centers do not become new recruiting grounds.

“The risks won’t end when the military declares victory,” Jones said in a statement to media. “Indonesia and Malaysia will face new threats in the form of returning fighters from Mindanao, and the Philippines will have a host of smaller dispersed cells with the capacity for both violence and indoctrination.” 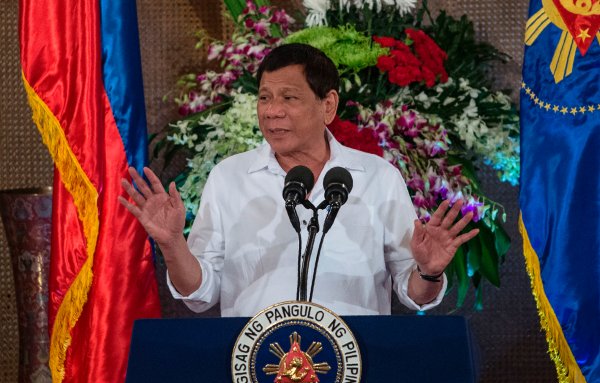 Filipinos Get Duterte's Rape Jokes, an Aide Says
Next Up: Editor's Pick