Can't Afford a Toilet? 'Go and Sell Your Wife,' an Indian Official Suggests

In public remarks recorded on video, a local official in the Indian state of Bihar reportedly quipped that villagers who don’t have enough money to install toilets at their homes could sell their wives for some extra cash.

The Indian Express reports that Kanwal Tanuj, a district magistrate in Bihar, made the remarks during an event promoting a nationwide cleanliness campaign known as Swachh Bharat Abhiyan, or Clean India Movement. Initially appealing to the audience to comply with the campaign’s sanitation standards to protect the dignity of women, the official’s later comments struck a confusing chord.

“Save the dignity of your women if you can. How poor are you?” the Express quoted Tanuj telling the audience. When a man said he didn’t have enough money to install a toilet at his home, Tanuj reportedly replied: “If that is the case then go and sell your wife.”

Read More: This Indian City Will Pay You to Use Its Public Toilets

“If this is the mentality you have then go and sell your wife,” he continued. A video of the exchange was posted on Twitter Sunday by the ANI news agency. The official has yet to publicly clarify the meaning of his remarks, which remain unclear in the wake of online outcry.

Bihar’s government pledged earlier this year to eradicate open defecation from the state by 2019, according the Express. The state government’s effort includes a 12,000-rupee subsidy to help qualifying families build toilets at home. 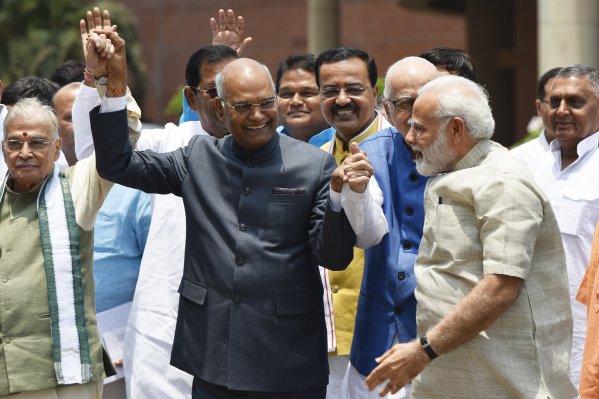 The Low-Caste Farmer's Son Taking High Office In India
Next Up: Editor's Pick