Ready to come back online?

HBO has revealed the first footage from the second season of sci-fi thriller Westworld. The video released at the show’s Comic-Con panel on Saturday is a violent and action-packed tease showing the return of Ed Harris’ Man in Black, Dolores (Evan Rachel Wood) gunning down guests while riding her horse, and Bernard looking at a dead tiger,

Westworld just started production on season 2 earlier this month, so the footage is from the first week of filming.

“My perception of reality has shifted significantly since I started doing this,” showrunner Jonathan Nolan told Comic-Con at the show’s panel. “I’ve convinced we must be in a simulation of some kind. I just did a tequila shot with Ed Harris in a parking garage at Comic-Con.”

More tidbits from the panel:

— Jeffrey Wright on learning Bernard was a host: “I didn’t appreciate at that time what it meant, but going through the course of the season and into this season I’m starting to understand the opportunity there as an actor and existential metaphor.”

— Star Evan Rachel Wood on her bumpy journey in the first season: “I would drive home covered in bruises and blood and be happy because it was amazing and it was for something that meant something.” She also weighed in on the moment she knew that Westworld was becoming a hit: “When I was in Target and somebody yelled out, ‘Freeze all motor functions!’”

— Jimmi Simpson objected to the idea that his young Man in Black character lost his humanity by becoming “evil.” “Being a slave to one’s own emotions is something only a human can feel. Dolores will never know the way a broken ago-destroyed man will be grasping and reaching for ways to cover up his own anguish.”

— Ben Barnes on the most challenging scene playing his Logan character. “Until you’ve ridden a horse balls to the wind, as it were, you will not know true terror or true joy.”

Earlier this week, EW revealed that actor Jonathan Tucker (Kingdom, Justified) is joining the season 2 cast as Major Craddock, “a commanding military officer.” He joins fellow Westworld newcomer Katja Herbers (Manhattan), who was recently announced as playing a “seasoned guest in Westworld whose latest visit comes at the park’s darkest hour.” There’s also Neil Jackson (Blade: The Series) as “a charming, resourceful man who finds himself in uncharted territory.”

Westworld will return to HBO in 2018. 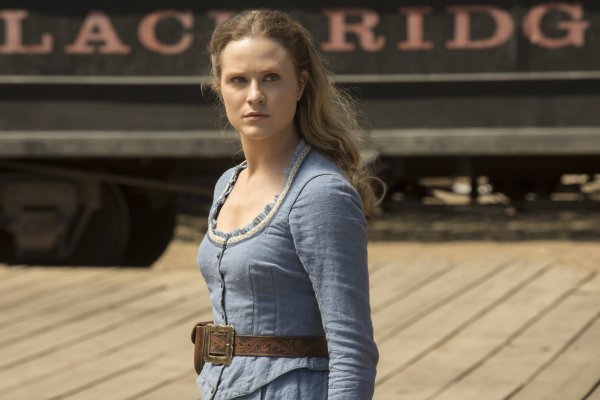 Evan Rachel Wood on the Moment She Knew Dolores Would Become Powerful on Westworld
Next Up: Editor's Pick