What to Know About Justice League Villain Steppenwolf

The latest trailer for Justice League gave fans at San Diego Comic-Con a glimpse of the film’s villain, Steppenwolf. He’s not as well-known as say, Lex Luthor or the Joker, but he’s a formidable foe. Batman, Wonder Woman, Aquaman and the Flash will need to join together to defeat him and his army. Here’s what you need to know.

Steppenwolf carries either a sword or a hammer. He’s an evil guide and uncle to the villainous Darkseid. Darkseid rules the hellish Apokolips and makes Steppenwolf part of his evil team. (Darkseid’s eventual appearance in the universe was also teased at the panel via a giant picture of animated characters from the DC universe.)

In the comics, Steppenwolf brings evil beings called Parademons with him to earth. They fly and breathe fire, kind of like human-dragon hybrids. Audiences already saw those Parademons in Batman v. Superman when Batman fought them in his nightmare.

In the comics, they come to earth to get Three Motherboxes (one of the more literal incarnations of a McGuffin in comics). Steppenwolf can use the boxes to travel to different dimensions and channel a power called “The Source,” which is pretty similar to The Force in Star Wars except that it also created life in the universe. One of the boxes is being held in Atlantis, so that’s probably how Aquaman will be convinced to join the Justice League and fight Steppenwolf.

Ciarán Hinds, who played Mance Radar on Game of Thrones, will play the villain in the film. But you won’t be able to recognize him as his character was filmed entirely with motion-capture technology. 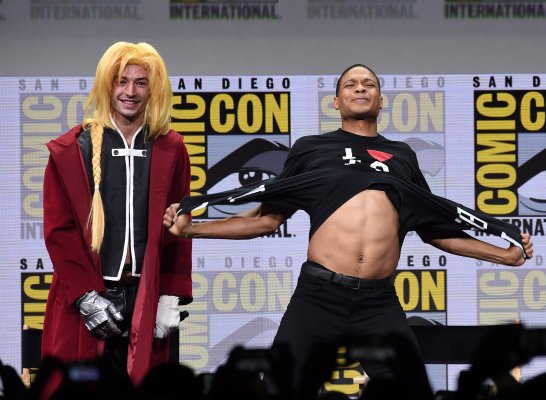 Justice League's Ezra Miller Is Having Way More Fun Than Everyone Else at Comic-Con
Next Up: Editor's Pick