In President Donald Trump’s operations, experience often takes a back seat to familiarity, trust, and a keen eye for what pleases the boss. So it made sense that Anthony Scaramucci was brimming with confidence when he took to the White House podium Friday, just hours after being named Trump’s new communications director.

Scaramucci, a smooth-talking New York financier, has almost no experience in Washington politics other than as a writer of checks to members of both parties. But he knows both his audience and his way around a television camera, and spent much of his first 34 minutes at the podium emphasizing the close personal affection he has for his new boss.

The appointment of Scaramucci, which triggered the resignation of beleaguered White House press secretary Sean Spicer, may mark a turning point in an administration that is increasingly under fire. His hiring signals that a President increasingly irritated by the Russia scandals and congressional stalemate is putting his instincts ahead of the counsel of his most trusted hands.

In hiring Scaramucci, Trump overruled the advice of his chief strategist, Steve Bannon, and chief of staff, Reince Priebus. Even Spicer’s decision to thrown down a him-or-me gauntlet didn’t persuade the President. Instead Trump relied on the guidance of his daughter Ivanka and son-in-law Jared Kushner, both of whom pushed for the move.

For six months, Trump had tried it the Washington way, hiring veteran Republican hands to lead his communications shop. But both Spicer and former communications director Mike Dubke, who resigned at the end of May, lacked the most important currency in the Trump realm: a rapport with the boss. Neither was sure of their place in his orbit, and therefore neither could speak authoritatively for the President. Spicer, a Washington fixture best known as a strategist and flack for the Republican National Committee, labored under the impossible task of defending a President who never quite trusted him and often embarrasses his press shop by contradicting their answers.

Within seconds of taking the podium, Scaramucci proved he was in a very different situation. His first act was announcing that Sarah Sanders, Spicer’s deputy, would be the outgoing press secretary’s replacement. Naming such hires is a task traditionally left to the president.

Scaramucci, a Harvard-educated lawyer, has spent his career navigating the hard-charging New York finance scene. He isn’t the first wealthy financier to find a valued place in Trump’s inner orbit. Trump has demonstrated a penchant for placing trust in those whose success is independent of his, like Treasury Secretary Steven Mnuchin, Commerce Secretary Wilbur Ross, and Director of the National Economic Council Gary Cohn.

The new hire’s easy demeanor and self-effacing answers about his past failures and middle-class upbringing drew an instant contrast from the man he was replacing. And he hewed to a cardinal rule of life in the Trump employ: keep the focus on the chief. Scaramucci’s obsequious display of fealty and devotion may have elicited groans, but they were tailor-made for an extra special audience of one. “I’m very, very loyal to the President,” he declared, adding at least four times that he “loves” the man in the Oval Office.

Scaramucci dodged questions about the ongoing Russia probe, saying he’d yet to have been briefed by the White House Counsel on the limits of what he can say in public. But he failed to avoid some of the same pitfalls that have plagued his predecessor, as he found himself defending Trump’s unfounded claim that 3 million or more illegal votes were cast in 2016. “There’s probably some level of truth to that,” Scaramucci said. (There isn’t.) And he dismissed pessimism over the GOP’s healthcare bill and the president’s dismal poll numbers.

“The president has really good karma, and the world turns back to him,” Scaramucci said of the healthcare bill.

Pressed on Trump’s approval ratings, Scaramucci went further, spinning a yarn about how poll numbers are only an accurate reflection of a moment in time. “The American people are actually playing a long game,” he said. “And I think they really, really love the president.”

It was just the sort of answer the president loves. 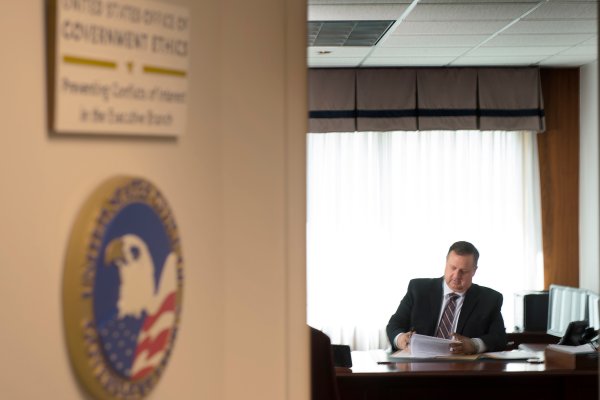 The White House Has Chosen a New (Temporary) Ethics Chief
Next Up: Editor's Pick