A man walks with his child, as activists from pro-Kremlin children's advocacy groups march through Moscow on March 2, 2013 to call on authorities to ban all foreign adoptions. The banner reads "The March for Protection of the Children."
Alexander Nemenov—AFP/Getty Images
By Lily Rothman

The controversy over a meeting involving members of the Trump campaign and Russian officials continues to grow. But one aspect of it may seem curious to people who don’t follow Russian politics: the idea that the meeting centered on adoptions.

On Monday, the Washington Post reported that President Trump “personally dictated” the statement in which his son Donald Trump Jr. said that the June 2016 meeting was mostly about “the adoption of Russian children”—a claim that was subsequently undercut by the release of emails that set it up.

Even if they were discussed at the meeting, Russian adoptions might seem like a niche topic for a presidential campaign to engage in, but they are actually at the center of a geopolitical storm that dates back to the end of the Cold War—one that has lately been used by the Russian government to fight back against U.S. sanctions.

The U.S. is uniquely implicated in the history of international adoption, as the nation that has—since Americans began opening their homes to European war orphans in the wake of World War II—long been the place where the most international adoptions are bound. But this particular story began about 25 years ago, with the fall of the Soviet Union.

As the Cold War came to an end, a new avenue opened up for Americans who longed to adopt. Beginning in June of 1991, per the Los Angeles Times, they were able to adopt from Russia, starting with handicapped children. The nation became a particularly popular destination for hopeful American parents after Romania clamped down on international adoptions that same year. (As TIME reported, the fall of Romania’s dictatorial Ceausescu regime in 1989 had exposed the “warehousing” of thousands of orphans and led to a subsequent wave of adoptions, but that wave was followed quickly by reports of babies being kidnapped or sold on the black market.) Experts noted that there was also a racial dynamic, as former Soviet nations offered white Americans struggling with infertility a chance to adopt a Caucasian baby.

At the time, amid tumult in the Russian economy and thawing emotions between the two nations, Russian adoptions by American parents were mostly depicted as fraught but feel-good stories in the American media, though Russian officials already worried about potential exploitation or resulting shame.

But by the early 2000s, the stories about Russian adoption had changed. In 2010, for example, the practice ended up in an unfortunate spotlight after a Tennessee woman put her 7-year-old son, whom she had adopted from Russia but found more difficult than expected, on a plane to Moscow alone with a note saying that she “no longer wish[ed] to parent this child.”

And, while many American families still hoped to adopt from Russia, that high-profile case helped draw attention to a harsh fact about the situation. By TIME’s 2010 count, about 58,000 school-age Russian orphans had been adopted by Americans since the end of the Cold War, but they arrived “in many cases reeling from the effects of substandard orphanage care and trauma suffered at the hands of their biological parents or fellow orphans.” Russian orphans had a disproportionately high rate of fetal alcohol syndrome, compared to children adopted from elsewhere, and regulations that were designed to give Russian parents more chances for domestic adoptions sometimes meant that children would spend more time institutionalized. Medical records for such adoptees could be sketchy or incorrect—and, on the other side, American parents eager to adopt often went into the process with blinders on. Though the relationship between the two nations had also produced many happy stories of children and their families, the situation had all the ingredients for disaster.

At that point, TIME explained that the incident had cast a shadow on all adoptions from Russia to the U.S., as some officials demanded a complete halt to the practice. “While Russia has been a popular choice since the mid-1990s for Americans hoping to adopt, the Russian government has recently been promoting adoption domestically,” the magazine noted. “A handful of high-profile abuse cases involving American parents may have spurred this approach. The number of children adopted by U.S. parents fell by two-thirds from 2004 to 2009.”

In December of 2012, Vladimir Putin signed a law that banned American families from adopting children from Russia and put a halt to those that were in progress at the time. But while the law, known as the Dima Yakovlev Law, was named after an adoptee who died after his father left him unattended in a car, many observers saw it as a response not to a child’s death but to a U.S. law—the Magnitsky Act, which on its face had nothing to do with children. That 2012 law, named after a Russian lawyer whose death was shrouded in mystery, applied a range of sanctions to Russian individuals in light of human-rights violations.

The Dima Yakovlev Law came just weeks after the Magnitsky Act was signed, a bit of timing that was widely remarked upon.

While the Russian adoption law had a uniquely political dimension, it was also just one part of a larger change in international attitudes about adoption across borders. As TIME explained in 2013 amid a major decline in foreign adoption, “the number of international children adopted by American families has dropped some 60% since a peak in 2004. That year, Americans adopted 22,991 foreign children, according to the State Department. In 2011, despite long waiting lists at adoption agencies, the total was 9,319—the lowest since the mid-1990s.”

The U.N.’s official stance is that international adoption should be a measure turned to only after consideration of ways to care for the child in the country of origin, and—due to the implication that adoption thus takes place after that country has failed to be able to support a child—some people see international adoption as reflecting poorly on the child’s homeland. So perhaps it’s no surprise that a change had been coming for decades, especially since the 1993 Hague Adoption Convention (which was fully put into action by the U.S. in 2008) attempted to sort out the tricky web of international supply and demand for babies.

The last few weeks have been yet another a reminder that, while parents may rightfully concentrate on how this debate will affect the fates of individual children, the complications that surround international adoption can affect the whole world. 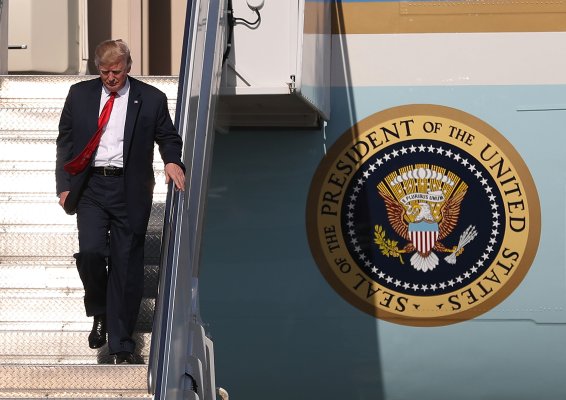 What Donald Trump Mocking Reince Priebus Reveals About His Presidency
Next Up: Editor's Pick