In this July 13, 2017, file photo, Education Secretary Betsy DeVos speaks with the media after a series of listening sessions about campus sexual violence in Washington.
Alex Brandon—AP
By Katie Reilly

One day after hundreds of teachers, parents and students protested Betsy DeVos in Denver, the Education Secretary spoke Thursday to a friendly crowd in the city at the annual meeting of the American Legislative Exchange Council (ALEC).

DeVos has long had ties to ALEC, a business-backed group that crafts conservative legislation at the state level and advocates for limited government. Nearly 2,000 state legislators across the country are members of ALEC, according to its website. Like DeVos, the group is a strong proponent of school choice, and she praised ALEC’s advocacy work in her speech as she discussed the causes that drew protesters to the Capitol.

“This advocacy has led to some — let’s call it excitement, on the left. You’re certainly no strangers to organized protests by defenders of the status quo,” DeVos said, drawing applause. “But I think it’s the first time in recent history I’ve been to an event where the protesters aren’t necessarily here just for me.”

The protesters who marched on Wednesday from Denver’s statehouse to the hotel where ALEC’s events are being held said they objected to DeVos’ policies and her collaboration with ALEC. They carried signs that read, “I am DeVos-stated,” and “Education is a right, not a privilege,” according to the Denver Post.

In prepared remarks, DeVos described the protests as a “badge of honor.” “Our opponents, the defenders of the status quo, only protest those capable of implementing real change,” she said. “You represent real change.”

“She needs to do what’s right by students and educators and not what’s right by the corporate interests that are trying to make profits off of education,” said Mike Wetzel, spokesperson for the Colorado Education Association, which participated in Wednesday’s protest.

At a different event on Thursday in Washington, D.C., American Federation of Teachers President Randi Weingarten said school voucher programs were the “slightly more polite cousins of segregation,” according to USA Today — a remark that drew condemnation from school-choice advocates.

DeVos defended voucher programs for giving decision-making power to parents and states. “My job is to get the federal government out of the way so that you can do your jobs,” she said. 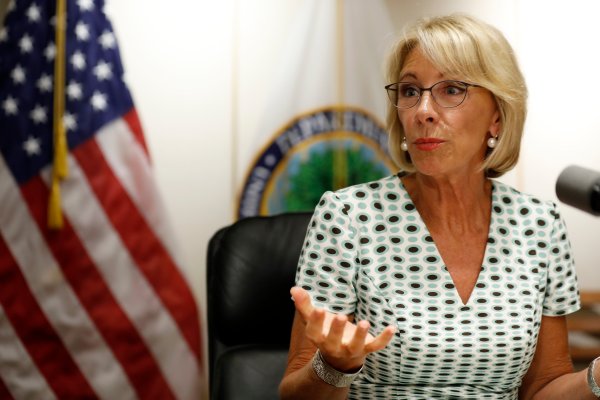