The report analyzed an updated version of the bill which includes additional funding for opioid recovery programs and out-of-pocket expenses. But the CBO did not factor in a version of an amendment first proposed by Sen. Ted Cruz which would allow Americans to purchase cheaper health insurance plans with fewer offerings. Those opposing that amendment argued it would increase health care costs for the sick.

The CBO report found that passing the health bill would reduce the federal deficit by $473 billion over the next decade. A large portion of those savings would come from Medicaid spending reductions, according to the CBO. The bill would end federal funding allowing states to expand Medicaid programs by 2024.

The CBO’s findings are similar to the office’s report issued for the first version of the bill, which it also said would result in an additional 22 million people losing their insurance by 2026. That bill was met with opposition from several Republicans, and leadership went back and revised the proposal.

Neither bill has enough support among Republicans to pass in the Senate. With 52 Republican Senators in the chamber and universal opposition from the Democrats, Senate Majority Leader Mitch McConnell can only afford two defections. More than two Republicans are opposed to each version of the bill.

McConnell acknowledged as much earlier in the week, stating that the Senate would vote to simply repeal the Affordable Care Act, also known as Obamacare. But McConnell appears to lack the votes for that, too. According to a separate CBO analysis, repealing Obamacare without passing a replacement would result in an additional 32 million Americans without health insurance. 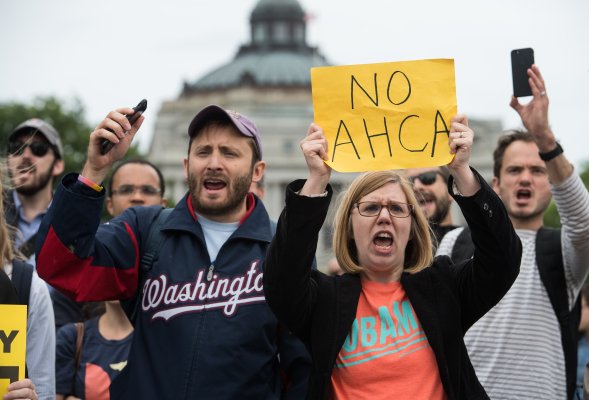 49% of Voters Disapprove of the House Healthcare Bill, Poll Says
Next Up: Editor's Pick