O.J. Simpson has been granted parole.

The 70-year-old former football star will leave Nevada’s Lovelock Correctional Center as early as Oct. 1 after a parole board voted Thursday to approve his release. The decision came after Simpson apologized for the 2007 armed robbery that led to his imprisonment.

During Thursday’s parole hearing, the famous felon said he never complained about his conviction during the more than eight years he spent behind bars. “I wish this would have never happened,” Simpson said. “I’ve done my time. I’ve done it as well and respectfully as anybody can. I’ve honored their verdict. I’ve not complained for nine years. I want to get back to my kids.”

Simpson appeared before four members of the Nevada Board of Parole Commissioners through a video teleconference, dressed in a light-blue button-down shirt. He hung his head briefly and thanked the board immediately after the announcement.

Earlier, he insisted he had always been a “good guy” before his conviction and was not a danger to the public. “I’ve basically spent a conflict-free life,” he said. “I’m not a guy who’s ever gotten in fights on the street.”

Simpson was convicted in an armed robbery in a Las Vegas casino hotel room in 2007. He and a group of men went into a hotel room to confront two sports memorabilia dealers and reclaim collectibles and other personal items which Simpson said belonged to him. He was sentenced to 33 years in prison but became eligible for parole after nine.

“I am sorry that things turned out the way they did. I had no intent to commit a crime,” Simpson told the panel. “It wasn’t worth it.”

The parole board on Thursday considered Simpson’s age, whether his conviction was a violent crime, his prior criminal record and his plans after release in making its decision. No one spoke out in opposition to Simpson’s release during the hearing. Bruce Fromong, a victim of the robbery, spoke in support of Simpson.

Connie Bisbee, chairwoman of the parole board, said Simpson was considered low-risk for being a repeat offender. She added that Simpson did not face disciplinary action while incarcerated.

The members of the parole panel were the same four who granted Simpson parole in 2013 on the first portion of his sentence, a minimum five-year term for kidnapping and robbery charges. Simpson has approached eligibility for parole on the remaining four-year-minimum term.

Simpson said he plans to live in Florida following his release. He will remain at Lovelock Correctional Center until his release plan is developed and approved.

Florida, or any other receiving state, must first accept Simpson for supervision before he can be discharged. If the state rejects the proposal, Simpson could stay in prison longer than Oct. 1. Nevada Division of Parole and Probation Captain Shawn Arruti said he does not anticipate a delay.

The former football player first fell from grace more than 20 years ago when he was charged with killing his ex-wife, Nicole Brown Simpson, and her friend, Ronald Goldman. The high-profile court case was dubbed the “trial of the century.” Simpson was ultimately acquitted.

Simpson’s oldest child, Arnelle Simpson, spoke about her father’s “true character” in a closing statement at Thursday’s hearing and was emotional as she said he was her “best friend” and “rock.”

“We just want him to come home,” she said. 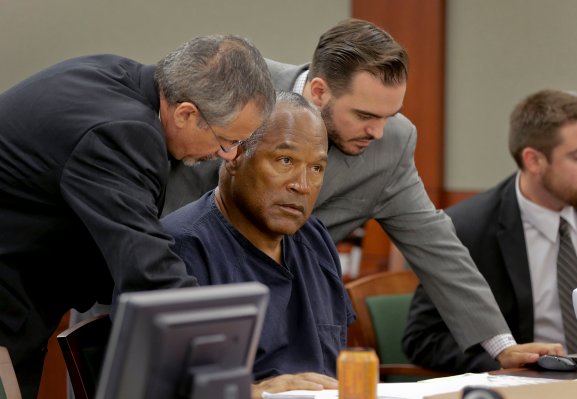