Seth Meyers on Trump's EPA Head: 'Like a Rat With a Clipboard Being a New York Food Inspector'

On Tuesday’s Late Night, host Seth Meyers took some time to focus on one department of the Trump administration that he says is actually accomplishing something. It’s the Environmental Protection Agency “that has actually been quietly implementing big changes, unfortunately, to the benefit of the select few,” he explained.

While Meyers mocked Trump’s long history of denying climate change, he took aim at Scott Pruitt, whom Trump appointed to run the EPA even though his past environmental experience “consisted mostly of suing the EPA in an effort to help big business.”

“It’s like the plot of a bad ‘80s college movie,” Meyers said of Pruitt. “He was the drunkest guy in the frat, but thanks to a paperwork mishap he became … the dean?” The late-night personality also asserted that “Scott Pruitt being the head of the EPA is the same as New York’s food inspector being a rat with a clipboard.”

In addition to concerns over air and water quality, Meyers noted that the EPA’s website removed information on climate change, the department’s team of scientists was fired, and Pruitt is considering allowing a cancer-causing weed killer. Though a more “troublesome decision,” he says, was to “reverse the ban on the use of a pesticide that the EPA’s own scientists have said could damage children’s brains.”

Meyers added a photo of Donald Trump Jr. and said, “If we have to protect anything, it’s the brains of our children because when we don’t protect their brains, they take meetings with Russian agents.”

Watch Meyers’ “Check In” segment above. 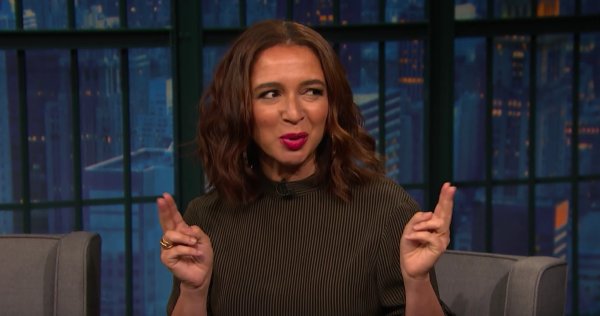 Here's Maya Rudolph's Secret to Her Ivanka Trump Impression
Next Up: Editor's Pick