There’s no situation like a formal adult conversation to test a three-year-old child’s patience.

And of all the cute kids making waves on the internet, Prince George may have had the least patience recently. As a royal with age-appropriate patience levels, he was not interested in lingering with his mom and dad (Prince William and Kate) as they prepared to board a plane to Berlin after an official visit in Warsaw, Poland. All checks out so far. After all, he is just a three-year-old royal who turns four on Saturday.

A tvn24 video clip shared to Twitter by Polish journalist Jakub Krupa on Wednesday shows the Duke and the Duchess of Cambridge saying their goodbyes with Polish dignitaries and politicians. But George appears so bored by all that formality that he tugs his father’s hand and taps him insistently. Prince George eventually even drags him up the stairs and onto the plane. The video also shows Princess Charlotte trying to tear her royal mother away from a chat.

In this moment, young George revealed himself to be a kid who has places to go and people to see. His eagerness to leave a social situation that has clearly run its course will likely serve him well in his role.

The family was in Warsaw to kick off the family’s official royal tours of Poland and Germany, where they’ll visit historic landmarks like Berlin’s Holocaust memorial.

The royal Twitter informed everyone the family was eager to meet “as many people as possible.” Sounds like a long trip George. 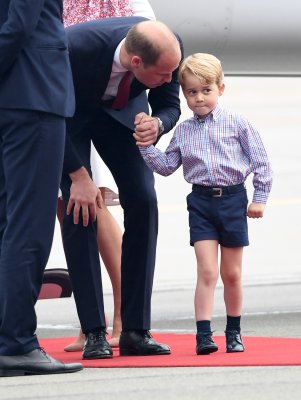 Shy Prince George Looks Ambiguous About His Visit to Poland
Next Up: Editor's Pick