Christopher Nolan: Dunkirk Is My Most Experimental Film Since Memento

Christopher Nolan has built a career making smart films that also happen to make hundreds of millions at the box office. His 10th feature, Dunkirk, may be the British-American director’s most ambitious yet. Shot almost entirely on location in Dunkirk, France, the movie depicts the harrowing week in 1940 during which nearly 340,000 British troops, stranded on the beach with German forces closing in, were evacuated by a fleet of more than 800 civilian boats. As Nolan, 46, tells TIME, they faced the choice of “surrender or annihilation” but held out for a seemingly impossible third option—a miracle.

Dunkirk (out July 21) is already being hailed as one of the most important contributions ever made to the war movie genre. A relentless thrum of action captured from air, land and sea, it is meant to be experienced as much as it is seen. Although its subject matter marks a departure from Nolan’s forays into the DC Comics Universe (The Dark Knight Trilogy) and outer space (Interstellar), it features many of the director’s trademarks. Nolan spoke to TIME about why and how he made this film now.

Over the past decade, you’ve made movies that take place in the DC Comics universe, within the human subconscious and out in space. Why come back to earth, to history?
Dunkirk is one of the great untold stories in modern cinema. Having made a trip on a small boat across the Channel about 25 years ago, the roughness of the water, the sheer physical challenge of making that crossing—but without anyone dropping bombs, without traveling into a war zone—cemented in my mind an extraordinarily high level of admiration for the people who in 1940 just got on those little boats and came over to help the soldiers.

Growing up in Britain, what was your perception of the events at Dunkirk?
In Britain, you grow up with this story. It’s really part of the national DNA. It’s in your bones as a British person. You receive the story first in its more mythic, somewhat oversimplified terms. The more you find out about the reality of the evacuation, the more you find out about the messy historical truth of the thing.

Do you think there’s a particular reason why the story hasn’t been told in film?
Yes, I do. What I realize in retrospect is this is a British film—it has no Americans in it—but it needs the Hollywood studio machine to be able to make something technically on the scale that’s necessary to do this story justice. I’ve always seen Dunkirk as a universal story, something that anybody could relate to. But the reason why it hasn’t been made before is it requires such massive resources.

How did you approach research?
We tried to not slavishly re-create photographs that we’d seen. We tried to look at enough material and absorb it so it was in the back of our minds. Then we tried to construct our own visual language for how to portray these things, to give the audience a sense of the paradoxical geometry of this event. You have lines of men queuing out to the sea, lines leading to nowhere. We tried to use symmetry and organization to express the almost bureaucratic nature of some of the horror of what was going on.

How did that influence how you filmed?
There are very few “God shots.” Everything is about trying to have the camera there on the beach with the soldiers. In the aerial sequences, the camera is always in the cockpit or mounted to the plane, always somewhere where it would need to be to photograph that kind of combat. And on the small yacht crossing the Channel to come to the rescue of the men, we almost never take the camera off the boat. Everything is shot from the point of view of the characters.

Why did you make this movie now?
This tale is about the idea of home. It’s about the desperate frustration of not being able to get to where you need to be. We live an era where the idea of too many people piling onto one boat to try and cross difficult waters safely isn’t something that people can dismiss as a story from 1940 anymore. We live in an era where the virtue of individuality is very much overstated. The idea of communal responsibility and communal heroism and what can be achieved through community is unfashionable. Dunkirk is a very emotional story for me because it represents what’s being lost.

You’ve made the distinction that you view this as a survival film, not a war film. Why?
Dunkirk is not really a battle—it’s an evacuation, a retreat. It’s a fight for survival, and it immediately drew me to the language of suspense, and the thriller, rather than all-out combat. It really was a question of, Can they pull off this miraculous feat before having to either surrender or be annihilated by the Germans? That was the choice: surrender or annihilation.

In a lot of movies that take place during wartime, we’re used to seeing emotional scenes like the mother waiting at home. But here, I didn’t even know the names of the primary characters.
Films have a sophisticated level of grammar that’s developed over the hundred years of cinema­ to be able to tell the audience everything and have them know much more than the characters. I actually wanted to take a step back and say, “What would you know if you were actually stuck on that beach?” The more I read firsthand accounts, the more apparent it became that part of the terror, part of the real sense of fear and isolation and vulnerability of these men, was not knowing what was happening. Not knowing, lining up on the beach out to sea, if somebody was going to come and get them or not.

While the movie certainly has some famous actors, many of the soldiers are pretty unfamiliar to audiences—especially Fionn Whitehead, who plays the soldier we spend the most time watching.
Fionn Whitehead had really done nothing before. He was 18 years old. That was exactly what we were looking for. Too often in Hollywood movies, there’s a sort of implicit pact between the audience and filmmakers that they can cast a 35-year-old as a fresh-faced recruit and we’ll be O.K. with that. One of the most striking things when you spoke to veterans of this conflict is they were just children when they went over there.

There’s a lot of intensity: boats flooding and capsizing, oil ablaze in the ocean, bombs landing on the beach. How much did you rely on special effects?
Obviously we used visual effects when necessary to remove rigs, to make things safe, and make it look like there are more planes than there were. But of any of the films I’ve worked on, this was the most in-camera [meaning shot on film, not added as an effect later] film we’ve been able to achieve. There’s a very uncomfortable matchup between computer-generated imagery and the World War II period. It tends to not sit well.

What makes Dunkirk different from your previous films?
I would say Dunkirk is my most experimental structure since Memento. I tried to give the audience an experience that will wash over them. They’ll sit back and—I won’t say enjoy the ride, because this is a very intense ride—but experience the film. I never want the audience to watch the film in an overly cerebral way. It’s not meant to be a puzzle. It’s meant to be an experience.

This is the shortest movie you’ve made since your 1998 feature debut, Following. Why did Dunkirk demand less time to tell?
I wanted to tell the story primarily in visual terms and not through the usual theatrical devices of people discussing backstory. I wanted to throw the audience straight into this very intense, snowballing series of events that in my films you normally only find in the third act. I felt the intensity of the experience would be such that there would be a saturation point where people couldn’t sit through anymore. For that reason it felt important that it be as short as possible.

Seeing this movie in Imax is almost overwhelming. How much are people missing if they watch it from their couch?
I like to make films that justify the price of admission. The type of film that is most vital right now is a cinema of experience—a film in which you really feel that you are being taken away someplace different.

You are a serious filmmaker whose movies are also blockbusters. Why has that become a rarity lately?
It’s a very different world than when I made Batman Begins, where I felt I was really able to express something about what I felt. Right now individual voices in mainstream filmmaking are a little bit buried by the concept of the existing franchise, which has become a very robust economic model for the studios. But I think that will change. I think that the studios have always valued freshness and new voices. Hollywood has always valued the unexpected—even if Wall Street doesn’t. 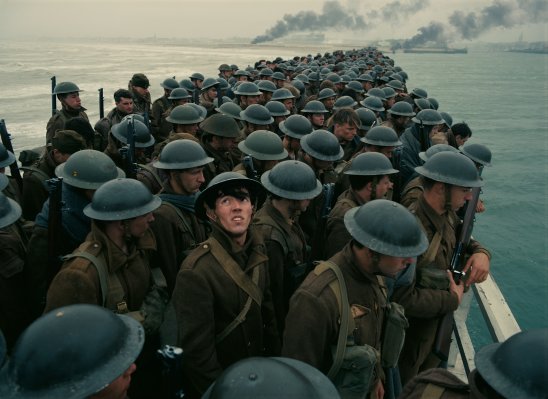 Review: Christopher Nolan’s Dunkirk Is a Masterpiece
Next Up: Editor's Pick