The season seven premiere of Game of Thrones saw Samwell Tarly experiencing the less-than-glamorous aspects of training to become a maester of the Citadel, including cleaning out his superiors’ chamber pots. However, after having a chat with Archmaester Ebrose — played by Jim Broadbent — Sam was inspired to break into the Harry Potter-esque restricted section of the Citadel’s library to seek answers about defeating the White Walkers.

“He’s not gone to the Citadel for an easy life for himself,” John Bradley, who plays Sam, told TVLine. “When he appealed to Jon Snow, he said, ‘Send me to the Citadel because that’s where I can do the most good… I will help you win this war.’ He wants to go to the Citadel and work, and find knowledge that he can apply that’s going to change the course of things for everybody.”

Later, as Sam pored over the “borrowed” books at home with Gilly and baby Sam, there was moment when the camera panned over the pages he was reading to reveal a picture of a dagger with striking similarities to the Valyrian steel one some believe is currently in Littlefinger’s possession — but was also shown strapped to Arya Stark’s hip in promotional photos for the season.

According to Reddit user jumpman72, the text accompanying the drawing read as follows:

This information seems to indicate that the elusive dagger is constructed of both known materials capable of killing White Walkers and will likely play a role in the coming war against the dead.

But that wasn’t the only clue hidden in the text. On the page opposite the one that revealed there could be a massive store of dragonglass located at Dragonstone castle, there was a cut-off paragraph that suggested ingesting dragonglass may be a cure for greyscale. “Considering the only person to be cured [of greyscale] that we’ve heard of was Shireen [Baratheon] and the mine of dragonglass is at Dragonstone, [where Shireen grew up], it seems likely,” wrote Redditor Beastmodekait.

Luckily, the only other major character infected with greyscale — Jorah Mormont — has already found his way to the Citadel. With Sam’s help, there may still be time to stop the spread of his disease and give him a chance to retake his spot at Daenerys’ side. 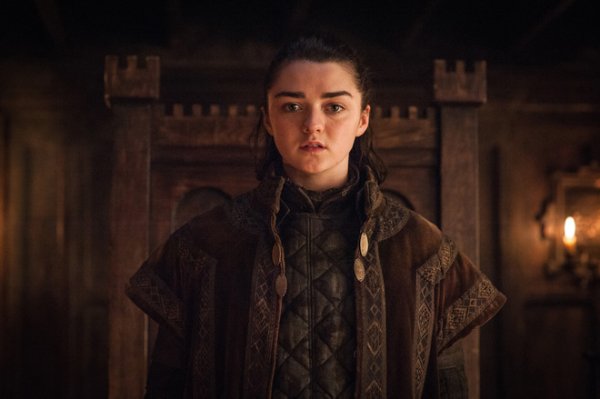 What That Brutal Game of Thrones Scene Means for Arya Stark in Season 7
Next Up: Editor's Pick