Game of Thrones Just Teased a Long-Awaited Reunion for Arya

Perhaps the biggest revelation from the first episode of season seven of Game of Thrones came in the teaser for future episodes. The ad featured several quick shots, including one of a direwolf — and not a white one, which means it can’t be Jon Snow’s pup Ghost. Most likely, the full-grown wolf is Arya’s long-lost direwolf Nymeria.

The last we saw Nymeria, she was fleeing the wrath of the Lannisters. The loyal wolf attacked Joffrey after he said he would “gut” Arya early in the first season. Fearing retribution, Arya shooed her beloved pet away. Cersei then insisted that Ned execute Sansa’s direwolf Lady instead.

Since, Nymeria’s probably been wandering the woods. The A Song of Ice and Fire books upon which Game of Thrones is based offer a hint of what’s to come for the dog — if you have a vicious dog on your side, why wouldn’t you use her in the war for the fate of humanity?

In the clip, we see Arya reacting in shock to seeing Nymeria. However, this could be a misleading cutting trick to make it seem as if the youngest Stark daughter will be reunited with her pet when in fact Nymeria shows up in another part of Westeros. 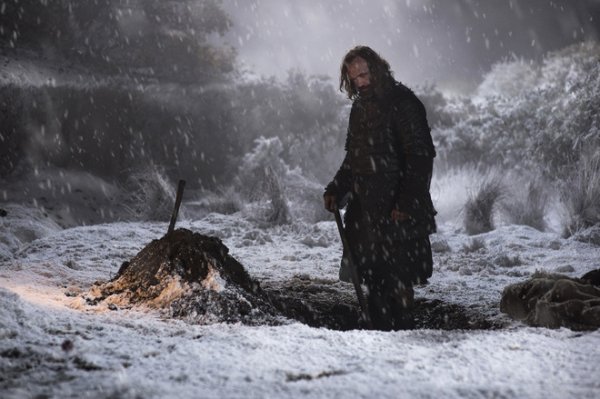 The Significance of That Cryptic Hound Scene in the Game of Thrones Premiere
Next Up: Editor's Pick