Game of Thrones is usually spoken about in the context of recent TV spectacles — both the shows that garner similarly huge ratings, like The Walking Dead, and those that shared its ambitious taste for high drama, like Mad Men or Breaking Bad. But the seventh-season premiere, which aired Sunday night, called to mind something far lower-brow: The final moments of a season of reality TV.

That’s no dig: From Survivor to RuPaul’s Drag Race, the tension on competition-based series — which Thrones, in its seventh year moving toward an answer to the question “Who will rule?,” surely is — ratchets up in the most artful way once the field has been winnowed down. That’s when those still vying for the prize are no longer in chaotic melee mode but judging their moves carefully, waiting for the right time to make their move. The betrayals and the last cullings hurt all the more, but they’re preceded by a moment, however brief, of purest calculation.

Of course Daenerys (Emilia Clarke) and Tyrion (Peter Dinklage) were saved for episode’s end — at which point they literally contemplated a gameboard, plotting their moves on a chessboard-style map of Westeros. These are the characters whose odd-couple movement toward endgame (she’s blunt, fiery force, he’s a subtle tactician) seem to elicit the most interest from the show itself; their final sequence, beginning with a beautifully photographed procession on the beaches of Dragonstone, felt at first blush almost too similar to the majestic final scene of season 6, from the visuals to the music. But that previous sequence was all about potential — anything still seemed possible. Daenerys is, now, but one of the characters thinking through her moves, a process of deciding that will necessarily foreclose some options.

Cersei (Lena Headey) seems all too aware that too many of what had once been her viable options for consolidating power are no longer available. Working on a larger board — a map of Westeros painted on a floor of her palace — Cersei has never been more painfully poignant as when she railed against her enemies, all those who’ve turned against her. In previous seasons, Cersei could command with a look. Now, Headey sells Cersei’s damaged psyche with petulant and troubling rants against all those for whom she has no time. The regal figure who once instructed those who feared her that in the game of thrones, you win or you die now practically whined: “I understand whoever loses dies.” But she has no pity for the dead, including her late son Tommen. Little wonder Jaime (Nikolaj Coster-Waldau), a character whose moral complexity sometimes goes underexamined, seemed quite so troubled by what he saw.

MORE: Here’s Every Major Theory About Game of Thrones Season 7

Not everything in the season premiere worked as well as did these rhyming scenes of two queens, one losing ground and one standing ready to gain it, contemplating the size of their respective maps. A cameo by platinum-selling recording artist Ed Sheeran was far too distracting to be really worthwhile, and a scene in which Sandor Clegane (Rory McCann) received a prophecy felt like the portion of this over-an-hour episode that might have been pruned back a bit. But I return, again and again in memory, to various scenes that play up the power of characters who’ve been too often disempowered (often violently) on Thrones: The women, from Cersei to Daenerys to Sansa and Arya Stark — both, in keeping with the show’s scattered, watchful moves toward an ultimate reunion, working separately. For both Stark sisters this episode represented a meaningful coming-into-their-own. Sansa, the elder (Sophie Turner) has become a gifted tactician, proving in a debate with brother Jon that she’s putting to use all she learned from Cersei but adding in a dose of cold-bloodedness that Cersei, lost in a vengeful game of her own devising, can no longer manage. Arya, in an opening scene that at first beggared belief — Hey, didn’t Arya kill Walder Frey last season?, viewers wondered, shortly before remembering that Arya has mastered disguising herself in others’ faces — got the big mass-kill scene her partisans had been waiting for.

But it wasn’t all red meat for fans. The crisp editing of the Arya sequence, exploiting dramatic irony right up to the breaking point, was one among numerous scenes that seemed to indicate Thrones isn’t just keeping up to its old standards but actually learning new tricks. Another was the introduction of Samwell Tarly’s life in Old Town — who knew this show, which has mastered wartime action but had never produced a quickfire sequence quite like this one, with its repetitive chamber pots to be emptied, could be quite this sharp?

MORE: George R. R. Martin on the One Game of Thrones Change He ‘Argued Against’

It’s Sam (John Bradley-West) who seems, almost by accident, to be at the center of one of the show’s defining debates — whether or not the Wall will hold back the marauding forces beyond it. Even casual viewers have reason to disbelieve that, but historian Maester Marwyn (Jim Broadbent) delivers a lecture about the long history of fear in Westeros, each time proven to be fallacious. “The wall stood through it all, and every winter that ever came has ended,” he says. That’s another thing about TV — from reality to the sort that just seems at times to echo reality. Those best prepared to triumph are those who are willing to roll with perpetual evolution. TV thrives on change, and Game of Thrones, in ways big and small, has already begun delivering. 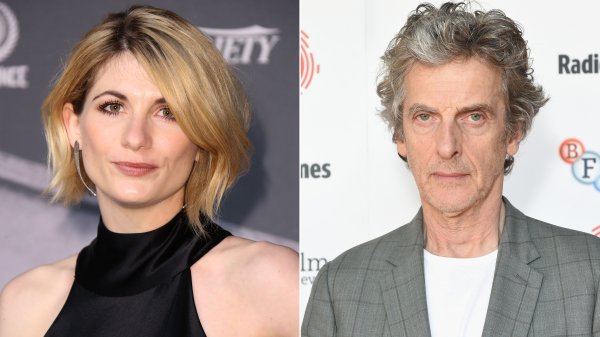 A Female Doctor Who? It's About Time
Next Up: Editor's Pick