George A. Romero, the filmmaker behind such classic zombie horror films as Night of the Living Dead and Day of the Dead, died Sunday of lung cancer. He was 77.

A statement from Romero’s manager noted that Romero leaves behind friends, family, and “a filmmaking legacy that has endured, and will continue to endure, the test of time.” That sentiment certainly was apparent as celebrities paid tribute to the artist across social media.

“RIP #GeorgeRomero. You made me want to make movies, and helped me to find meaning in monsters,” Guardians of the Galaxy director James Gunn, who also worked on the screenplay for 2004’s Dawn of the Dead, tweeted. “Thank you. I love you.” On Facebook, he posted a more elaborate tribute, recalling seeing Night of the Living Dead as a child, which Gunn says “not only scared the living hell out of me, and made me forever jump at creepy children, but it was so incredibly DIY I realized movies were not something that belonged solely to the elites with multiple millions of dollars but could also be created by US, the people who simply loved them,” he said in part, citing Dawn of the Dead, The Dark Half, and Martin for their influence on him as well.

“Just heard the news about George Romero,” wrote horror producer Eli Roth (Hostel). “Hard to quantify how much he inspired me & what he did for cinema. Condolences to his family.” A few minutes later, he noted, “Romero used genre to confront racism 50 years ago. He always had diverse casts, with Duane Jones as the heroic star of NOTLD. Very few others in cinema were taking such risks. He was both ahead of his time and exactly what cinema needed at that time.”

“The sad news keeps rolling in,” Greg Nicotero, an executive producer on The Walking Dead, wrote on Instagram. “There are so many things to say about this man, my friend, my mentor and my inspiration. For what he gave us all with passion and fire, his unrelenting spirit will live forever. Blessed that I was honored to present him this award late April in Pittsburgh where IT ALL F–ING STARTED!!!! Never ending love to him and his family.”

“No one mined the zombie metaphor like Romero. (After he invented it.) No one has come close,” said Joss Whedon. “RIP & thank you to a Great Film Artist.” 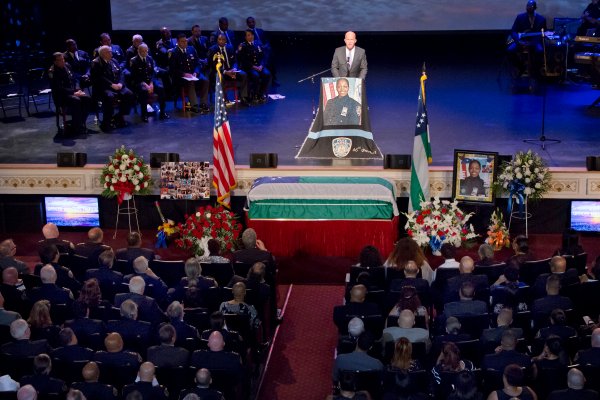 Read the NYPD Commissioner's Stirring Eulogy for an Officer: 'Where Are the Demonstrations for This Single Mom?'
Next Up: Editor's Pick