This Is How It Feels to Eat 13-Year-Old Steak

The glass encased skeleton at Wat Pah Nanachat, a forest monastery in northeast Thailand, belonged to a local woman years before the former abbot had her bones disinterred and put on show in the meditation hall. Using her skeleton as a focal point, the monks there practice Theravada Buddhism’s death meditation, contemplating their future corpses in nine distinct stages of decomposition. In stage one, according to Buddhist texts, the corpse is “swollen, blue and festering,” in stage two it’s “being eaten by crows, hawks, vultures, dogs, jackals or by different kinds of worms,” and so on until its final stage, when it’s “reduced to bones gone rotten and become dust.” The meditation is supposed to bring home how short life can be and is a warning to those enamored with its fleeting pleasures.

On a Thursday in July, I sampled one of those pleasures at Hong Kong’s Intercontinental Hotel — and thought a lot about ageing corpses. Along with several food writers I was there to eat “vintage” beef served up by Frenchman Alexandre Polmard, a 27-year-old breeder, butcher, and cause celebré. A kilo of Polmard’s cote de boeuf (rib steak) vintage 2000 — cut from a cow slaughtered before the World Trade Centre Towers fell — has sold for $3,200. Polmard says he once turned down an offer of €10,000 ($11,700) for an even rarer, older cut because “sometimes you can’t pay for everything.”

“I use a very special ageing process and I am the first butcher in the world to do it,” he tells the reporters who are crowding in on him at the hotel’s Steak House restaurant. “I won’t say my beef is the best in the world because every meat is different. It’s like wine.”

And that’s Polmard’s whole bit — to get people as excited about something’s flesh as they do a fine Montrachet: mindful of terroir and history and prepared to shell out. In service of this, the tasting evening’s promoters had laid out three large cuts of Polmard beef on a wooden table. We were to sample them overlooking Hong Kong’s Victoria Harbour, upon which swam the reflected light of the city’s tower blocks. One of the steaks, a six-week-aged tenderloin, had a gossamer pink sheen that recalled dental clinic ads for healthy gums. Another liver-brown prime rib was far older: a 2004 vintage — from the year Mark Zuckerberg launched Facebook, Janet Jackson’s nipple caused controversy at the Super Bowl, and Alexandre Polmard turned 14.

Polmard still looks boyish as he mugs for the gathered press. His English is good but he’s hesitant with it and one gets the sense he has to grit his teeth to get through promo tours like this. He spears the aged beef with a two-pronged fork and hoists it to his mouth as if he’s about to take a bite. The reporters take pictures of him grinning with it — like a cartoon lion with a cartoon steak.

Read more: Chef René Redzepi Wants You to Forage for Your Own Food

This is how aging meat works: pretty soon after an animal is killed its body starts to eat itself. Enzymes break down its muscle fibers, softening its flesh and releasing the amino acid glutamate. That’s the G in MSG and a pure hit of umami. At the same time, its fat oxidizes and water evaporates from muscle tissue. By carefully regulating the conditions under which decomposition takes place, Polmard is able to control how tender his meat becomes and the density of the flavors inside it.

Cows of the Blonde d'Aquitaine breed of the French breeder and butcher Alexandre Polmard (R) are pictured on February 23, 2015 in Saint-Mihiel, eastern France.
Jean-Christophe Verhaegen—AFP/Getty Images

I had prepared for something “swollen, blue and festering,” per the Buddhist canon, but it turns out there’s none of that. Most of Polmard’s steaks are only actually aged for between 28 and 56 days. They rack up their decade-surpassing vintages through a process pioneered by his father that is akin to cryogenic freezing: it involves blasting -43C air over the meat continuously, at a speed of about 75 miles per hour.

The difference between doing that and just throwing the meat it in a freezer turns out to be some difficult-to-follow nuance of how water crystalizes inside muscle fiber. The interesting part is that there’s no limit to how long meat can be preserved in this manner provided there’s enough power to keep the sub-zero air flowing. Ages from now, when the world is naught but ash and tundra, the descendants of today’s One Percent will be theoretically capable of bringing the world’s last remaining meat out of Polmard’s cold storage for a feast.

Read more: KFC Explains How its Chicken Is Cooked

The first of the steak we taste comes from an animal that died disappointingly recently. Carpaccio of six-week aged beef is tootsie rolled around four-week aged tartare. The shimmering bolus — topped with truffle, caviar, or lemon rind — looks like it’s going to be difficult to swallow but it actually tastes light, slightly sweet and surprisingly fresh. “Feminine” is how Polmard describes his beef — lighter, and more refined, than marbled Kobe or the hefty Black Angus.

The big-show, though, is the 2004 vintage. It’s seared on the outside but still cold in the middle — bleu, as the French say — which apparently protects its texture. Also on the plate are strips of 62-day aged, long-bone rib-eye, decorated with pieces of beef heart and pearly tangles of fat. How does it taste, this 13-year-old flesh? Well, like a great steak. The very best steak, maybe. But that’s it. Weeks later, when I try to dredge up some other superlative, nothing comes except “really cool.”

Like all of Polmard’s beef, the 2004 vintage is from a female Blonde d’Aquitaine cow raised on his farm in northeastern France’s Lorraine region. It spent its short life outside, grazing meadows and woodland, before being taken for slaughter at somewhere between 36 and 42-months. Polmard says the taste of the beef is largely down to the type of food the cow eats and ensuring that it doesn’t undergo a long, stressful journey to the slaughterhouse. The “cryogenic” process doesn’t add much in terms of flavor. “It doesn’t give the quality, it fixes the quality,” he says. “It keeps my signature inside the meat.”

Indeed the main difference between Polmard’s meats seems to be the price: at the Intercontinental Hong Kong, a plate of the 62-day aged long bone rib eye is $430 and it’s $350 for the 2004 tenderloin.

After dinner, with a cognac in his hand, Polmard’s conversation comes more easily. As a kid, he says, he swore he wouldn’t become a butcher like his father. He quit his French hometown of 5,000 people for New York City. But he soon found himself homesick, and after being caught in the snow on 5th Avenue one bitterly cold day, Polmard called his father and told him he was returning to France. “Every morning I take my mug and my cigar and I go to my farm and I work on the land and I see all my cows outside,” he says. “I can’t put my cows inside the building. They need a place to walk. That’s very important.”

A bovine nirvana, in other words, where the fleshly mortification of Theravada Buddhism does not apply. 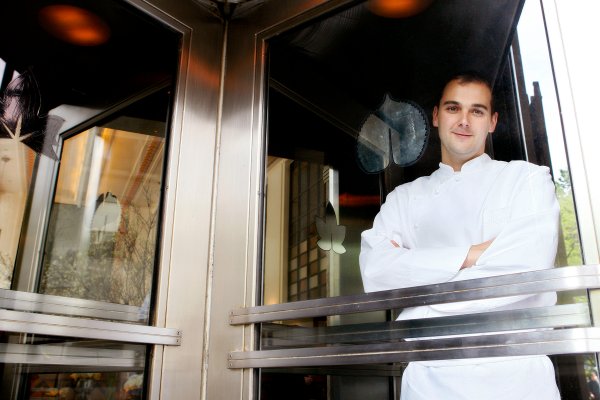 These Are the Best Restaurants in Every State
Next Up: Editor's Pick