A Beloved Former Pastor Retracted His Support of Same-Sex Marriage. It Will Harm LGBTQ People More Than He May Know

A participants holds a rainbow flag during the gay and lesbian pride parade in the center of Madrid on June 30, 2012
Pedro Armestre—AFP/Getty Images
Ideas
By Matthew Vines

Vines is the author of God and the Gay Christian and the executive director of The Reformation Project, a Bible-based non-profit organization.

“Don’t say anything you don’t mean.”

That is author and retired pastor Eugene Peterson’s rendering of Matthew 5:37 in The Message, his popular paraphrase of the Bible that’s sold millions of copies and endeared him to Christians across the theological spectrum. The more traditional translation of Jesus’s teaching is famous: “Let your ‘yes’ be ‘yes,’ and your ‘no,’ ‘no.’”

Unfortunately, Peterson didn’t follow that counsel this week in a statement he is now regretting. In an interview with Religion News Service’s Jonathan Merritt, he was asked whether he would perform a same-sex wedding ceremony for a gay couple in his church who were “Christians of good faith,” and he responded with one word: “Yes.”

As the executive director of an organization that works to advance LGBTQ inclusion in the church, I’ve been aware of Peterson’s accepting views on same-sex relationships for more than two years. He’s shared them in smaller settings for some time now, including in a recorded dialogue at Western Theological Seminary in 2014, the video of which is now online. I did not publicize those statements then, because I believe in giving people space to decide for themselves how much they are willing to sacrifice to stand in solidarity with LGBTQ people. I hoped he would choose to stand with us in a meaningful way regardless of the cost, but honestly, I didn’t know if he would, because the cost can be very steep.

This week, Peterson found out first-hand just how steep that cost is. Many conservative Christians who had formerly respected him denounced and dismissed him. A popular conservative Christian satirical website mocked him. The biggest Christian book distributor, LifeWay, threatened to pull all of his books from their shelves unless he took back his support for same-sex marriage.

Just a day after Peterson’s statements had sent shockwaves through the church, offering profound encouragement to thousands of LGBTQ Christians weary of being others’ theological punching bags, Peterson released a statement saying that after “reflection and prayer,” he had changed his mind and would no longer perform a same-sex wedding. Adding insult to injury, he said that he’d never been asked to do so and “frankly, I hope I never am asked.”

Peterson wouldn’t be the first whose views on same-sex marriage in the church are unsettled enough that he vacillates between positions. It’s a complex topic, and I have sympathy for those who are struggling to figure it out. But Peterson’s statement raises more questions than it answers.

He said he’s changed his mind and would no longer perform a same-sex wedding “out of respect to the congregation, the larger church body, and the historic biblical Christian view and teaching on marriage.” But he doesn’t mention his own beliefs here, as most pastors who oppose same-sex marriage would. Apart from a perfunctory-sounding assertion that he “affirm[s] a biblical view of everything,” including marriage between a man and a woman, Peterson gives no indication in his statement that he believes that same-sex relationships are morally wrong.

To be clear: The main dividing line in the church is not whether Christians support blessing same-sex marriages. It is the more basic question of whether they believe all same-sex relationships are sinful in the first place. Peterson has made multiple statements in recent years that are simply incompatible with holding the belief that same-sex relationships are inherently sinful. None of them were publicized before now, but even his statements from this week alone are incompatible with that belief. No pastor who is opposed to same-sex relationships would ever say he would perform a same-sex wedding in his church. That just doesn’t happen, no matter how little time he has to respond to the question. And Peterson had a full week to clarify or retract his comments before they were published, but he did not.

By all accounts, Peterson is a good and gentle man. He’s a tender soul, and I feel compassion for him as he’s weathered the ups and downs of this turbulent week. But I feel even more deeply the grief and sense of betrayal he has caused to countless LGBTQ Christians. I know Peterson cares about gay people based on what he’s said publicly, but it’s not clear that he understands the gravity of his words on this topic. By stating his support for same-sex marriage and then retracting it a day after it was published, he confirmed the sense of so many LGBTQ people that we cannot trust church leaders and that the church is not a place where we can ever let down our guard. By not letting his “yes” be “yes,” he contributed to the feeling among LGBTQ Christians that we are disposable. He also highlighted the fundamental unfairness that the often careless words of those in positions of power and privilege — typically a narrow subset that only includes straight, white men — affect our lives far more than they will ever affect those who utter them.

I know Peterson cares for others above himself, and that is why he needs to know how harmful his most recent statement is. Although he did not say he believes same-sex relationships are sinful, that is how many conservative Christians are taking it. Pastors will now use his statement to support their condemnations of LGBTQ people from the pulpit. Christian parents will use it to force their LGBTQ children into conversion therapy. It will be used to fracture relationships, to kick people out of churches and tell them God is disgusted by them. Peterson’s good intentions will not change the destructive impact of his words.

At the end of his statement, Peterson says he will “concentrate in this final season on personal correspondence over public statements.” I so sympathize with that desire. But the damage he’s unintentionally done this week means he still has unfinished business left to do. You simply cannot drop a rhetorical bomb on a despised minority group and then retreat into isolation, leaving them to grapple with the fallout of your words on their own. It would be wrong for part of the legacy of such a kind and generous man to be something so wounding.

Peterson has a right to hold his views tenderly, and he has a right to take the time to think them through. But he also needs to engage with LGBTQ Christians directly in light of the pain and confusion he has created. And he needs to decide whether he wants to allow his words to harm us or not. 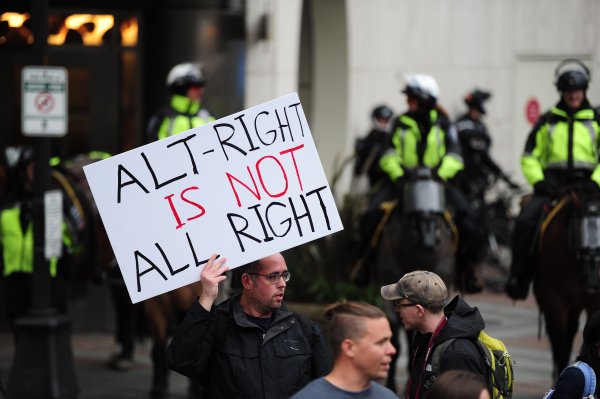 Southern Baptists Vote to Condemn Alt-Right
Next Up: Editor's Pick