President Donald Trump on Wednesday defended his embattled son, Donald Trump Jr., for holding a meeting with a Russian lawyer in hopes of gaining discrediting information about Hillary Clinton during the 2016 U.S. presidential campaign, saying: “I think many people would have held that meeting.”

The President made the comments in an interview with Reuters, in which he claimed that he was unaware “until a couple of days ago” of the June 2016 meeting that has further fueled accusations that the Trump campaign colluded with the Russian government in order to sway the presidential election.

Emails released by Trump Jr. Tuesday in the face of a coming report from the New York Times revealed that he jumped at the opportunity to meet Russian lawyer Natalia Veselnitskaya, who supposedly had potentially incriminating information supported by Moscow officials about his father’s Democratic rival.

The email exchange is the most concrete evidence to date that the Trump Campaign welcomed assistance from the Kremlin to help win the presidential election. The release of the documents comes at a time when Special Counsel Robert Mueller is actively investigating the campaign’s ties to Russia following probes from Congress and former FBI Director James Comey, who Trump abruptly fired in May.

Trump said in the interview Wednesday that he directly questioned Russian President Vladimir Putin over his involvement with U.S. election during a two-hour long meeting in Germany last Friday. Putin said he was not, according to Trump.

“I said, did you do it? And he said no, I did not. Absolutely not,” Trump said. “I then asked him a second time in a totally different way. He said absolutely not.” 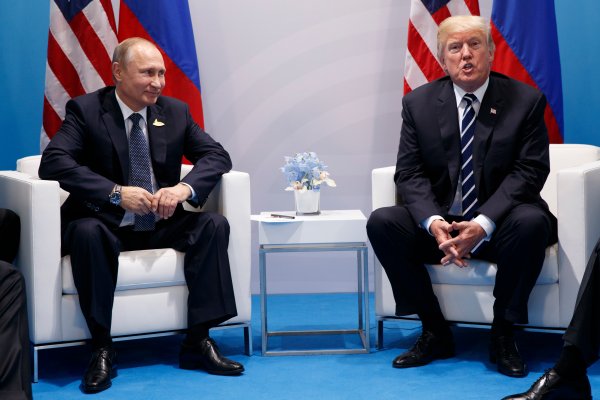 President Trump on Vladimir Putin: 'I Think We Get Along Very Well'
Next Up: Editor's Pick