President Trump on Vladimir Putin: 'I Think We Get Along Very Well'

President Trump weighed in on his two-hour long meeting with Russian President Vladimir Putin Wednesday, pointing to a Syria cease-fire plan as proof of its effectiveness.

“Yeah, I think we get along very well and I think that’s a good thing, that’s not a bad thing. People said, ‘Oh they shouldn’t get along.’ Well, who are the people that are saying that? I think we get along very, very well. We are a tremendously powerful nuclear power, and so are they. It doesn’t make sense not to have some kind of a relationship,” Trump told the Christian Broadcasting Network’s Pat Robertson in an interview.

“He wants what’s good for Russia, and I want what’s good for the United States,” Trump said. “And I think in a case like Syria where we can get together, do a ceasefire, and there are many other cases where getting along can be a very positive thing.”

Trump also told Robertson that Putin would have been happier if Hillary Clinton had been elected instead of him, because he’s working to export energy and strengthen the U.S. military, which Clinton would have “decimated,” he told Robertson.

“And that’s why I say, why would he want me? Because from day one I wanted a strong military, he doesn’t want to see that,” Trump said, presumably alluding to claims that Russia wanted him to win the election. Several intelligence agencies have concluded that Russia purposely interfered in the 2016 election to help Trump and discredit Hillary Clinton.

Trump’s comments come one day after his son, Donald Trump Jr. revealed an email exchange showing he agreed to meet with a Russian attorney, Natalia Veselnitskaya, after being promised compromising information on Clinton in June 2016.“This is obviously very very high level and sensitive information but is part of Russia and its government’s support for Mr. Trump,” Rob Goldstone, a British music publicist who facilitated the meeting, wrote in an e-mail to Trump Jr. before the meeting. 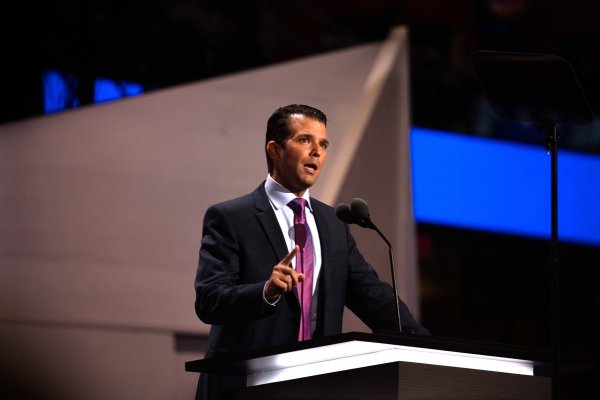