Donald Trump Jr. has come under fire this week following revelations that he met with a Russian lawyer in June of 2016, after being told that the meeting might lead to incriminating information about Hillary Clinton. As questions about the younger Trump’s actions cast a shadow on his father in the White House, President Trump finds himself in a situation somewhat parallel to the experiences of several of his predecessors.

Doug Wead, a former adviser to both Presidents Bush and author of All the President’s Children, tells TIME that Trump is just one of many children of presidents from American history who have become the subject of scandals that raised trouble for their fathers’ administrations.

For example, Neil Bush, the oilman son of President George H.W. Bush, was accused of violating conflict of interest regulations by serving on the board of directors for Silverado Banking Savings and Loan Association in Denver, which went bankrupt in 1988 and received a billion-dollar bail-out from taxpayers. The scandal blew up during his father’s presidency in 1990, when a Federal Deposit Insurance Corporation lawsuit claimed “gross negligence” and blamed Bush and several other directors for not stopping the institution’s questionable loans practice. Observers questioned whether Bush’s access to the White House was why he got the gig, and whether his connection had helped the company during the proceedings.

A $49 million settlement was agreed to in 1991 and Bush denied wrongdoing, but the headlines embarrassed the Republican Party and his father, who described him as the “perfect” child to People magazine.

“I worried about the impact on Dad and my role in this thing,” Neil Bush told TIME in a July 23, 1990, interview. He also sought to set the record straight on the conflict of interest claims, adding. “I would be naive if I were to sit here and deny that the Bush name didn’t have something to do with it. But I want to make it very, very clear: I was never asked, and I made it clear before joining the board that I never would intervene for Silverado in the regulatory process.”

Another example comes from the other side of the aisle, with Franklin Delano Roosevelt, who — like Trump — relied heavily on his children for political counsel and assistance. One of his sons, Jimmy, had only recently resigned from being an executive in the insurance business to go work in the White House, assisting his father, when a scandal broke.

In 1938, the Saturday Evening Post wondered why Roosevelt’s son Jimmy was reported to be making millions in the insurance business, possibly building up his Boston firm by “‘twisting’ accounts away from other agents by political leverage” so that “fortunes of [FDR’s] lanky eldest flowered like the lilies in paradise,” as cheeky political commentary in TIME summed up the uproar in 1938.

Just as Neil Bush’s qualifications to serve as a Silverado director were questioned, Jimmy Roosevelt’s success “startled” the insurance community, according to TIME’s characterization. Experts were as surprised, the magazine noted, “as the medical fraternity would be if a youngster who had never attended a medical school suddenly turned out to be America’s greatest specialist in the eye, ear, nose and throat, in abdominal and pulmonary surgery, in obstetrics, pediatrics and chiropody.”

The stress of the bad press exacerbated a stomach ulcer condition, and Roosevelt eventually had to stop working for his father’s White House.

Given the conflict-of-interests questions that can arise for the children of presidents who work in the business world, Wead says they often gravitate toward industries at the very opposite end of the spectrum.

That may be why some presidential children — like Jimmy Roosevelt, who had a second career as a Hollywood producer — gravitate toward the arts. At least that’s the theory that Wead tells TIME he once heard from one of President Ford’s children: When you’re given a script, he said, is the one time you don’t have to worry about saying the wrong thing. 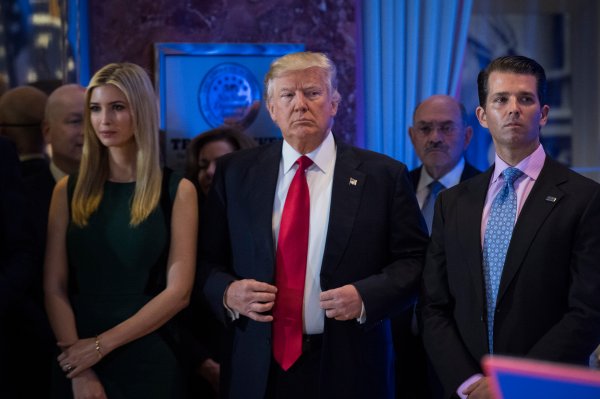 Not Even Trump Can Break the Justice Department
Next Up: Editor's Pick