Americans Are Really Bad at Drawing These 3 States

Last week, we challenged readers to draw the outlines of all 50 states and Washington, D.C. from memory, and then graded each attempt using an algorithm to measure how closely each submission resembled the correct shape. Based on over 2 million submissions, we are now able to measure which states were the hardest and which were the easiest.

While some of the results were what we expected, other states were surprisingly confounding. As you might guess, the easiest state was Colorado, where 93% of participants scored at least a ‘B’ and usually an ‘A’ or ‘A+’. (Colorado is almost a perfect rectangle when one uses the common map projection used in Web applications.)

Hawaii’s archipelago was the most difficult–also unsurprising–but the next two were curious. Participants had a lot of difficulty with Maryland, which hugs the cap of Virginia and wraps around the top of the Chesapeake Bay. They also struggled with Michigan, which most of us can picture as a mitten-shaped state. Some people used a right-handed mitten instead of the correct left-handed one and many forgot the Upper Peninsula, which is larger than many people think. While we expected Alaska to be the hardest, it was actually fourth.

Below are nine randomly selected entries for the three hardest states, drawing from a range of grades. The correct shape is in the middle.

Overall, though, the results were encouraging for the forces of American geography. Here is the mathematical average of 10,000 randomly sampled submissions for each state:

And just for fun, here is a composite map of the highest-scoring entries: 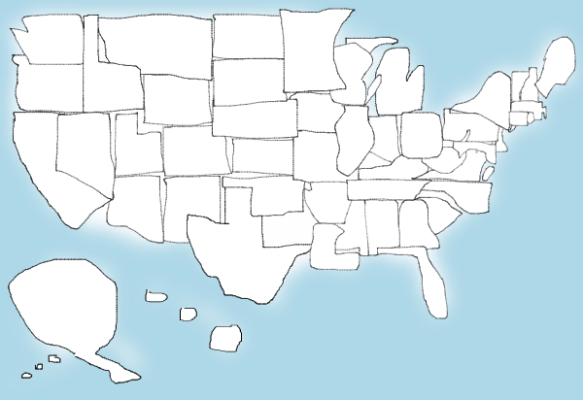 Quiz: See How Well You Can Draw All 50 States
Next Up: Editor's Pick