John McCain on Donald Trump Jr.: My Sons Would Be Court-Martialed If They Did That

Senator John McCain sharply criticized Donald Trump Jr. for taking a meeting with Russian lawyer Natalia Veselnitskaya during the 2016 campaign, claiming such an interaction would have been unacceptable when he was the Presidential nominee in 2008.

“I can assure you the people around me would not be inclined to do that kind of thing, especially not one of my sons. ‘Cause my sons—they’re in the military. You know, they’d probably be court-martialed,” McCain said Tuesday, the Weekly Standard reports.

Trump Jr. finds himself at the center of a political controversy after the New York Times reported his meeting with Veselnitskaya. While he originally said the meeting was centered around adoption policies, the Times subsequently reported that he met with Veselnitskaya because he was promised compromising information on Hillary Clinton. On Tuesday, Trump Jr. released an email chain confirming he had been promised “very high level and sensitive information but is part of Russia and its government’s support for Mr. Trump.”

After he released the emails, McCain was one of several Republican Senators who said Trump Jr. needed to testify before Congress. “We’ve got a lot more to learn about the whole issue. … Another shoe drops from the centipede every few days,” he said, according to the Standard. 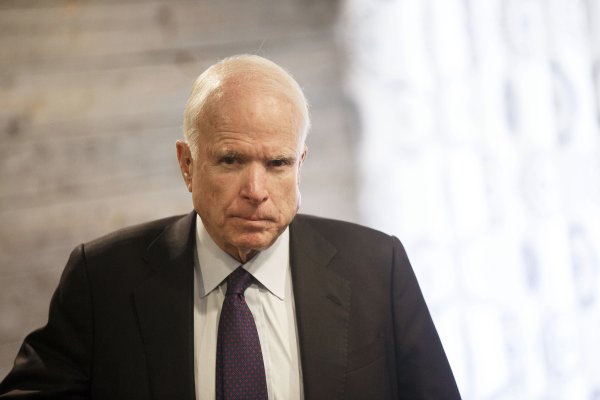