Meet The Guys Who Invented Sports Broadcasting As You Know It

Chris Russo (R) and Mike Francesa (L) of 'Mike and the Mad Dog' get together for a SiriusXM Town Hall at SiriusXM Studios on July 6, 2017 in New York City.
Cindy Ord—Getty Images for SiriusXM
By Sean Gregory

The sound pierced the radio airwaves, for 19 years, a shrill blare that somehow offered comfort: Christopher “Mad Dog” Russo, co-host of the wildly popular and influential “Mike and The Mad Dog” radio show on WFAN in New York City kicking off the program, at around 1:05 PM on weekday afternoons.

“Good afternoon everybody! How are you today?”

Russo’s voice, described as sounding like “Donald Duck on steroids” in an excellent new ESPN 30 for 30 documentary on Mike and the Mad Dog that airs July 14, signaled the start of a five-hour fix: Russo and partner Mike Francesa debating local and national sports issues of the day, interrogating top players and coaches and executives from all the major leagues, and sometimes veering off on inane pop culture tangents. Francesa, with his stiff “Lawng Island” baritone, played the authoritative heavy: one New York newspaper columnist dubbed him the “Sports Pope.” Russo had a bit of a speech impediment — “remember” sounds like “renember” — and a voice unfit for broadcast school, let alone a drive-time radio show in America’s largest market, carried on a 50,000-watt station that could be heard hundreds of miles from New York.

And yet the unlikely pairing thrived, becoming a ratings hit for nearly 20 years and revolutionizing the way America consumes and talks about sports. All of those shout-fest TV shows crowding ESPN and its rivals, the hot-takes brimming from every sports blog––there’s a strong case to be made that no duo had more to do it with it than Mike and the Mad Dog. “There’s a direct lineage,” Francesa says in an interview with TIME.

The History of Mike and the Mad Dog

Back in 1987, Emmis Broadcasting decided launch the country’s first all-sports radio station, WFAN, in New York. WFAN got off to a rough start — the programmers recruited national broadcasters, like Greg Gumbel and Jim Lampley, to talk New York sports, which turned out to be a costly miscalculation. They weren’t from New York, they didn’t sound like New York. The station was bleeding money, and on the brink of extinction.

Help came in 1988, when Emmis purchased WNBC radio, housed at 660 on the AM dial. The signal was much stronger than WFAN’s original home, 1050. Emmis moved WFAN to 660 AM, and inherited morning man Don Imus from WNBC. Even though Imus wasn’t a sports host, his show continued on WFAN, giving the station a revenue base that could keep it afloat. (Years later, in 2007, CBS Radio — WFAN’s current parent company — fired Imus from WFAN for making racist remarks about the Rutgers women’s basketball team).

In 1989, Russo and Francesa were paired for the all-important drive-time spot. “We always brought that intensity, that bravado, that fierce individual personality to our show,” Francesa says, “and that’s what I thought made it so good.” After a rocky start, the program climbed to the top of the ratings by the spring of 1990. At the time, there were five full-time sports radio stations in the United States. By 1995, some 130 all-sports stations had launched. Sports gabbing was now a viable business.

The shouting matches then moved to television (including Mike and the Mad Dog, which was simulcast on cable from 2002 through 2008). In 2001 ESPN launched “Pardon the Interruption,” in which Washington Post sportswriters Tony Kornheiser and Michael Wilbon knocked around sports news of the day as if they were at the bar. The show was a ratings success, and ESPN launched similar programs like “Around the Horn” and “First Take.” Says Francesa: “It went from us, to regular radio, to Pardon the Interruption, to where it’s all the different kind of shows you see where they have lists, and they debate topics and back and forth.” FS1, the Fox sports network launched in 2013, has gone all-in on debate in an attempt to rival ESPN.

“The bottom line is, it became proven, though FAN, that you can do sports full-time, radio or television, and make a little money with it, and get some ratings in the day time,” Russo says in an interview with TIME. “A sports talk show at 1:00 in the afternoon is going to to better for a radio station or TV network then putting on the best of the Dallas Cowboys.”

Russo and Francesa recognize their contribution to the all-debate, all-the-time culture, but they don’t embrace all the results. “They’re completely homogenized,” Francesa says of today’s TV sports debate shows. “They’re very formatted. What we did was none of the above. It was extremely intense and personal.”

Frank as ever, Russo isn’t shy about criticizing his heirs. “FS1 hasn’t had impact,” Russo says. “I’m sorry. I know they don’t want to hear this. None of my buddies go to FS1 just to see what’s going on. It’s just the way it is.”

The pair recognize, however, that they would have a hard time gaining a foothold in today’s crowded market.”We’d have trouble,” says Russo. “Could you put two people on, that people did not know that much about, throw them on a radio station or a TV station, and then all of a sudden that could have that sort of impact? It’d be tricky. The day of the super-powerhouse duo, you can make the argument that you can no longer have that in 2017. It’s too fractured. What you do now, is you look at get a little slice of the pie. What you did 20 years ago was to get the whole pie.”

Russo and Francesa’s memorable run came to an end in 2008, and the 30 for 30 documentary relives the split. “It wasn’t a pretty breakup,” says Francesa. Before he started a new radio channel on Sirius XM, Russo called Francesa on the air to say goodbye to both his partner, and his audience. He broke down. Later, Russo’s father Tony, who bonded over the Yankees with Francesa, also phoned in. “One thing I want to ask you,” Tony, himself crying a bit, said to Francesa. “Can I call you at any time?” Francesa finally teared up.

The Future of Russo and Francesa

Like many long-term couples, Mike and the Mad Dog had a roller coaster relationship. Francesa says he most admired Russo’s work ethic, and wouldn’t change anything about his former partner. “As crazy as it sounds, if he was any different, we probably wouldn’t have had the success we had,” Francesa says.

Russo gives his former partner props for his intellect. Asked what he’d change about Francesa, Mad Dog treads carefully. “Maybe I’d like to see him be a little more open to other ideas,” says Russo. “So I guess take away a touch of his pomposity? I think it’s good to have a healthy does of that. Mike’s a good person down deep. Without wanting to, without meaning to, maybe he can rub you the wrong way.”

When talking about his wish that Francesa display more curiosity about some sports, like tennis — a Russo passion — Russo drops a malaprop, one of his signature traits. “Mike is very interested in 99 percent of topics,” says Russo. “But the 5 or 6 percent he’s not interested in, Mike just doesn’t care.”

Since Russo left for Sirius XM eight years ago, Francesa has flown solo on WFAN. He’s continued to top the ratings. His last show on the station, however, is set for December 15th. He plans to continue working in some capacity, and podcasting intrigues. “It’s almost like the wild west,” says Francesa. “The idea of allowing anybody to have a podcast is a nice concept. But it’s not one that’s workable for the companies or the advertisers. How do you cut through the clutter? If you’re a brand, you have a big advantage. And that’s what I will bring to the new world.”

Neither host rules out a reunion. “I do think there is a chance that there will be some sort of Mike and the Mad Dog deal down the road,” Russo says.

Aaaaaaaaaaaaa!! That doesn’t sound too bad. 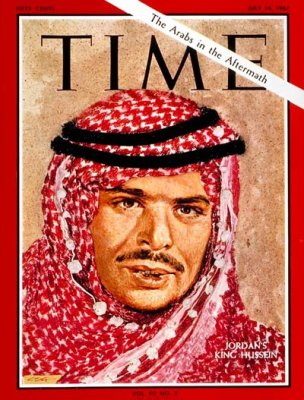 50 Years Ago This Week: The Middle East in Turmoil
Next Up: Editor's Pick