At least, that’s the message from Deadpool‘s Ryan Reynolds, who shared an Instagram post on Monday night bowing down to the box office glory of Patty Jenkins and Gal Gadot’s Wonder Woman, which officially overtook Deadpool in ticket sales over the weekend to become the tenth-highest-grossing superhero film of all time with nearly $369 million in domestic sales. Deadpool hit $363 million, which means it brought in $5 million more so far.

While they exist in rival superhero franchises — Deadpool is a part of the Marvel universe and Wonder Woman in the D.C. one — Reynolds didn’t seem bothered by some competition. Instead, he doffed his cap to praise his fellow comic-based film.

“The merc may be filthier, but her B.O. is stronger,” he wrote wittily to caption an image of Deadpool’s glove-clad hands making a heart around a Wonder Woman pendant. (In Deadpool, Reynolds plays a “merc” or mercenary with a notably elaborate vocabulary of curses. And in this case, his reference to Gal Gadot‘s “B.O.” is a nod to strong box office sales, not — presumably — body odor.)

Director Patty Jenkins responded to Reynolds’s shout-out on Twitter as well. “You are the absolute greatest, Ryan Reynolds,” she wrote. “We love you and your movie too.” 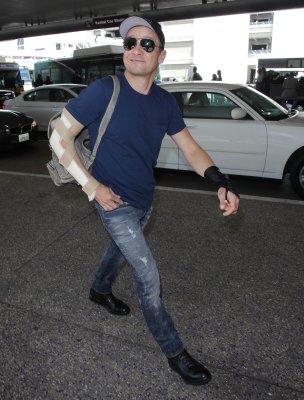 Jeremy Renner Commits to Stunts So Hard He Breaks Bones
Next Up: Editor's Pick