The New York Times first reported the meeting on July 8, citing “confidential records” described to the paper. According to the Times, Trump Jr., Kushner, and then-campaign manager Paul Manafort met with a lawyer the paper identified as Natalia Veselnitskaya. According to the Times, Veselnitskaya represents several state-owned Russian businesses and a son of a senior government official whose business was under investigation in the U.S. at the time of the meeting.

The Times notes that this is the first time a meeting between Trump’s closest associates and a Russian national has been reported to have taken place during the campaign.

Trump Jr. said in a statement to TIME that an acquaintance asked him to attend the meeting, but did not tell him who he would be meeting with, and that the meeting was primarily about the Russian adoption program in the United States.

Putin banned American families from adopting Russian children in 2012. The ban was part of the country’s response to the Sergei Magnitsky Rule of Law Accountability Act, which allows the U.S. to sanctions Russian officials who are believed to have violated human rights. Veselnitskaya is an opponent of the Magnitsky, the Times reports.

“It was a short introductory meeting. I asked Jared [Kushner] and Paul [Manafort] to stop by,” Trump Jr. said in a statement. “We primarily discussed a program about the adoption of Russian children that was active and popular with American families years ago and was since ended by the Russian government, but it was not a campaign issue at that time and there was no follow up.”

Kushner’s lawyer told TIME he “briefly” attended the meeting at the request of Donald Trump Jr. Although the Times reported in April that Kushner initially did not disclose contacts with foreign officials in his security clearance forms, his lawyer explained that was a “premature” error was rectified one day later, and that this meeting was disclosed.

“Mr. Kushner has submitted additional updates and included, out of an abundance of caution, this meeting with a Russian person, which he briefly attended at the request of his brother-in-law, Donald Trump Jr. As Mr. Kushner has consistently stated, he is eager to cooperate and share what he knows,” his lawyer said in a statement.

Veselnitskaya told the Times the meeting was primarily about the adoption issue. “Nothing at all was discussed about the presidential campaign,” she told the paper.

The Times subsequently reported Sunday that Donald Trump Jr. attended the meeting after being told there was compromising information about Hillary Clinton, which was not released in his initial statement.

In an additional statement provided to TIME, Donald Trump Jr. Acknowledged that he was told Vesinitskaya could provide “information helpful to the campaign” and she said she had information that individuals connected with Russia were “funding the DNC and supporting Mrs. Clinton” but that her statements didn’t make sense.

Kushner’s office did not respond to requests for comment. Trump Jr. said he asked Kushner and Manafort to attend the meeting but told them nothing else about the substance. 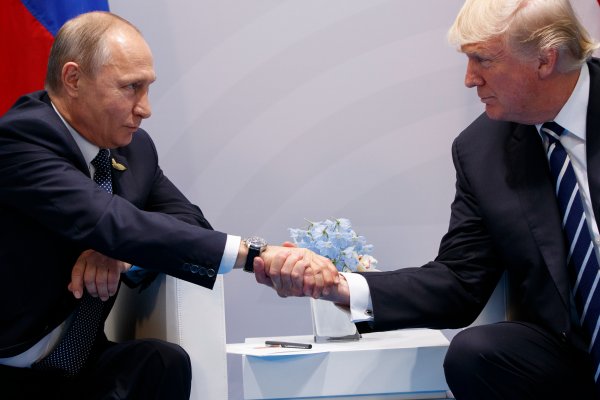 Trump Wants to Establish a Cyber Security Unit With Putin
Next Up: Editor's Pick