U.S. President Donald Trump and Russian President Vladimir Putin are sitting down for their much-anticipated first meeting Friday, and the first footage of the two world leaders shaking hands has already been released.

The video was posted on Facebook by German Chancellor Angela Merkel’s cabinet, the Bundesregierung, with the caption: “Exclusive perspective! We put a video camera on our foto colleague’s camera showing you very special insights into the informal meeting of G20, the so-called ‘retreat.'”

In this photo provided by the German Government Press Office (BPA) Donald Trump, President of the USA (left), meets Vladimir Putin, President of Russia (right), at the opening of the G20 summit on July 7, 2017 in Hamburg, Germany.
Steffen Kugler /BPA via Getty Images

Trump tweeted ahead of his meeting with Putin that there is “much to discuss.” They are expected to broach foreign policy issues such as the conflict in Syria and Russia’s actions in Ukraine. Many are also waiting to see whether Trump brings up Russia’s attempts to interfere with the U.S. election. 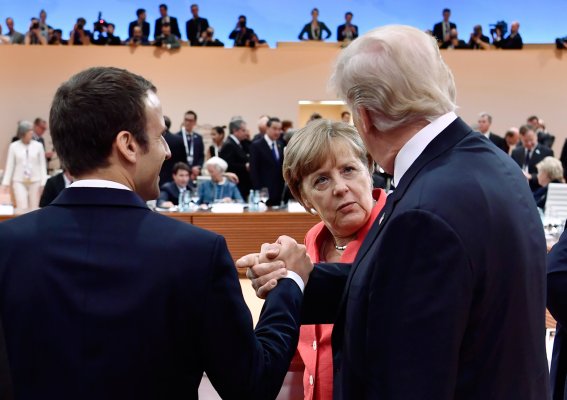