Since the Donald Trump Administration took office, an ocean of ink has been spilled scrutinizing Democrats’ minority status in Washington, rehashing the presidential race from every angle, second-guessing recent House special election losses — especially the recent race in Georgia — and generally wondering how the party can get back on track.

It’s largely thanks to this outpouring that Americans are now familiar with the supposedly tidy division between Bernie Sanders–style progressives and Hillary Clinton–style pragmatists, vying for what is sometimes called “the soul of the party.” This ongoing conversation has drawn in Democrats in elected office at every level, myself included.

It’s often struck me that one big thing is missing from this conversation. All the think pieces, agonized columns and point-counterpoint skirmishes, which we’ve seen more of in the last six months than we did during President Obama’s eight years in office, have largely addressed a question whose answer is already known.

As Democrats, the secret to reviving our fortunes turns out not to be a secret at all: The American people want us, and anyone else who hopes to earn their vote, to talk about economic fairness, which they still feel is in short supply. They want us to lay out a plan for making sure they share in the profits they help create. They want to hear that from top to bottom, Democrats will close corporate tax loopholes and make sure the wealthiest Americans pay their fair share.

It’s well known that I was the first member of Congress to endorse Senator Sanders for president. That shouldn’t affect anyone’s objective reading of the data, and the data pointing us on this course is overwhelming. There is simply no substantive debate about whether this is the strongest winning message for the Democratic Party.

How do we know? A comprehensive post-election analysis by the polling and consulting firm Greenberg Quinlan Rosner, funded by multiple groups with nothing to gain by paying for bad information, found that fully 60% of voters believe “Jobs still don’t pay enough to live on and it is a struggle to save anything” — and that belief motivated their votes. The same analysis found that when Clinton changed the focus of her campaign message from the economy (on which she soundly beat Trump for months, especially after the presidential debates) to a vague call for “unity and opportunity,” she lost the most important ground of the campaign: who voters trusted more to help their pocketbooks.

According to Greenberg Quinlan Rosner, by the end of the campaign, voters ultimately trusted Trump more on the economy by a 48-42 margin. That simple fact transcended a good number of the other factors in play last November. Unless the President ushers in the era of blanket prosperity he keeps promising, being trusted on the economy will be similarly decisive in 2018, 2020 and beyond.

Perhaps just as importantly, the firm found that a generic congressional candidate running on a message of economic contrast — roughly, “Democrats support investing in Social Security, education and jobs with rising incomes, while Republicans support tax cuts for the richest” — significantly outperformed a more general contrast with Trump and his personality across multiple demographic groups. Like it or not, what you’ll do is more important to voters than who you are or what private values you stand for. Democrats need to understand that.

Unfortunately, many on the left are busy fortifying themselves into mutually exclusive camps that can’t agree on what the right message was in the last election, let alone the next one. We are rapidly losing our ability to cohere around a formula that everyone — whatever his or her feelings about Clinton, Sanders, James Comey or any other public figure — can reproduce to regain a governing majority.

The largely rhetorical fights we’ve indulged in lately are producing drastically diminished returns and wasting time we should be spending building a forward-looking economic agenda. This will take some hard looks in the mirror. We cannot treat the Obama era as the best we can hope for; the American people certainly don’t.

To the skeptics, I would only say this: Shouldn’t we focus on the same thing the American people are focusing on, rather than arguing with what they’re trying to tell us? 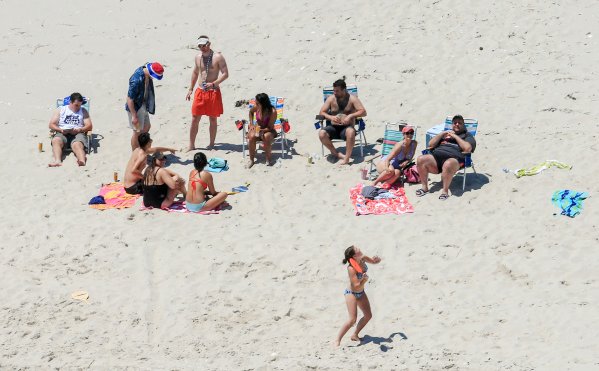 Chris Christie Gets Roasted With a Detailed Sand Sculpture of His Day at the Beach
Next Up: Editor's Pick