Samsung’s technological reach is formidable, shipping more phones than any other manufacturer. The company boasts nearly 23% of the global smartphone market, and its Gear VR headset, available since late 2015, is already among the most popular virtual reality devices going.

But when it comes to voice-activated speakers, a medium that some believe is on the cusp of becoming the next major computing platform, there’s reason to question whether Samsung has the wherewithal to keep up.

The South Korean technology giant may be developing a new Amazon Echo-like smart speaker powered by its Bixby virtual assistant, reports the Wall Street Journal. But it’s arrival would likely come long after category pioneers like Amazon, Google and Apple have either released or announced plans to launch voice-activated gadgets of their own.

Samsung’s dominance of the smartphone market speaks well of its ability to keep pace with the volatile tech landscape. But releasing a voice-activated gadget that could prove as popular as the company’s lucrative Galaxy phones poses two fundamental challenges: Samsung would be late to a space already dominated by Amazon and Google, and it has yet to prove that it can make a valuable virtual assistant. (Preliminary impressions suggest that Bixby needs no small amount of refinement.) While Samsung works to improve Bixby, its rivals have already carved out persuasive use cases for their respective voice-controlled gadgets.

Take Amazon. The company’s commanding e-tail empire makes the Echo a prime choice for online shopping, arguably more so than either Google Home, Harman Kardon’s Invoke speaker (powered by Microsoft’s Cortana assistant), or Apple’s forthcoming HomePod device. That, and the Echo is compatible with a broad range of Internet connected appliances, well-positioning it as a smart home hub. At this year’s Consumer Electronics Show, dozens of key brands, from Whirlpool to Ford, announced they’d support Amazon’s Alexa assistant.

Google Home, meanwhile, has its own edge: the company’s expertise in search, machine learning and online services makes it one of the most integrative home assistants for retrieving answers to questions or managing schedules. Apple’s HomePod hasn’t launched yet, but the iPhone maker is pushing the speaker’s advanced audio technology as a major selling point. And at this year’s Build Conference, Microsoft demonstrated how its own voice-activated aide Cortana can schedule time off from work or patch you into a conference call with a simple request.

That would seem to leave scant room for Samsung to meaningfully differentiate its device. If the competition already checks boxes like hands-free shopping, smart home control, premium audio, information retrieval and workplace communication, it’s hard to imagine what else Samsung might focus on that’s fresh or unexpected. Amazon has already built a sizable ecosystem around its Echo lineup, including an app marketplace with more than 10,000 voice apps (called “skills”) as well as multiple models that offer different price-functionality tiers. If Samsung’s voice-activated gadget arrives at price parity with the competition but has no signature bells or whistles, it risks being perceived as a “me too” knockoff in a market that punishes unexceptional imitators.

Much of it comes down to basic research expenditure. Apple and Google have placed significantly more emphasis on their respective virtual assistants than Samsung has for years. Apple has positioned Siri front and center of every device it makes, from the iPhone and iPad, to the Apple Watch and more recently the Mac, folding in hooks that make it usable with third-party apps. Those moves are doubtless foundational to Apple’s plans for its voice-centric HomePod. Though Samsung debuted its S Voice assistant in 2012, during the Galaxy S3’s unveil, most Android phones including Samsung’s typically come with Google’s digital helper installed (and users have little reason to use both).

Samsung made an important move to advance its artificial intelligence efforts in late 2016 by acquiring Viv Labs, the startup forged by Siri co-creator Dag Kittlaus. Just months before the deal was made public, Kittlaus delivered an impressive demo at TechCrunch Disrupt showcasing how Viv could be used to answer complex compound questions. But the technology has yet to show itself in any of Samsung’s products. Bixby has yet to fully launch in the United States since its voice-enabled features have been delayed due to a lack of data — vital for the assistant to learn English, reports The Korea Herald.

Samsung could of course surprise us. The company has clearly positioned Bixby on its smartphones as an alternative to the Google Assistant rather than a competitor. It’s framed Bixby as a streamlined, voice-activated means of navigating your phone efficiently, less so a digital butler. Its goal is for a Galaxy S8 owner to be able to utter a command like “Take all of the photos I shot yesterday and place them in my vacation album,” and have Bixby do precisely that. That the company manufactures so many other home appliances opens up interesting possibilities for smart home control as well. But its key challenge lies in launching a deeply functional, ideally distinctive in some way smart speaker, before the world gets too cozy handing Alexa or Google its list of daily needs. 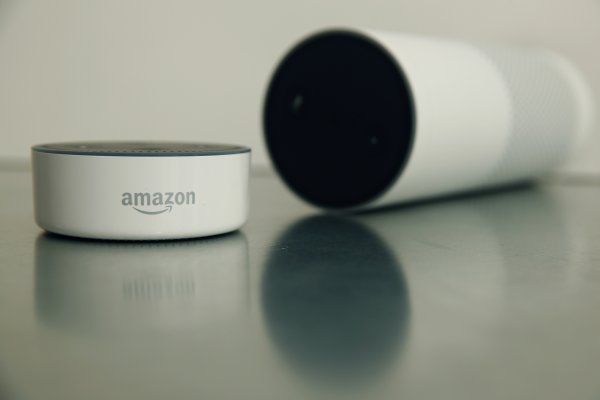 Here's Why You Can't Live Without the Amazon Echo
Next Up: Editor's Pick