Scientists Have Figured Out How Ancient Rome's Concrete Has Survived 2,000 Years

Scientists have solved the mystery of the durability of Ancient Rome‘s concrete and in the process may have learned something that could influence modern day construction.

The research, published this week in the journal American Mineralogist, details how ancient Roman sea walls built roughly 2,000 years ago managed to stand up to the elements due to a rare chemical reaction that seemingly has strengthened the concrete over time.

Modern cement mixtures tend to erode, particularly in the presence of seawater, but the Roman recipe of volcanic ash, lime, seawater and a mineral called aluminium tobermorite actually reinforces the concrete and prevents cracks from expanding, researchers found.

The reaction was caused by the seawater continually ramming into the structures for hundreds of years, allowing the mineral mixture of silica oxides and lime to grow between the volcanic rock aggregate and mortar to develop resistance.

“Contrary to the principles of modern cement-based concrete, the Romans created a rock-like concrete that thrives in open chemical exchange with seawater,” lead author Marie Jackson from the University of Utah said in the journal.

“It’s a very rare occurrence in the Earth,” she added.

While the Romans benefited from more access to natural volcanic ash, the concept could one day be used as a more environmentally-friendly alternative to modern cement mixing, which emits a significant amount of carbon dioxide into the atmosphere.

“Romans were fortunate in the type of rock they had to work with,” Jackson said. “They observed that volcanic ash grew cements to produce the [mortar]. We don’t have those rocks in a lot of the world, so there would have to be substitutions made.”

Jackson is working to create a replacement recipe that she proposed using in place of steel for a planned tidal lagoon in the United Kingdom.

“I think Roman concrete or a type of it would be a very good choice [the lagoon]. That project is going to require 120 years of service life to amortize the investment,” she told the BBC earlier this year.”

Jackson warned that typical cement mixtures wouldn’t stand up the elements as well as the Roman-style concrete could.

“Those will surely corrode in at least half of that service lifetime,” she said. 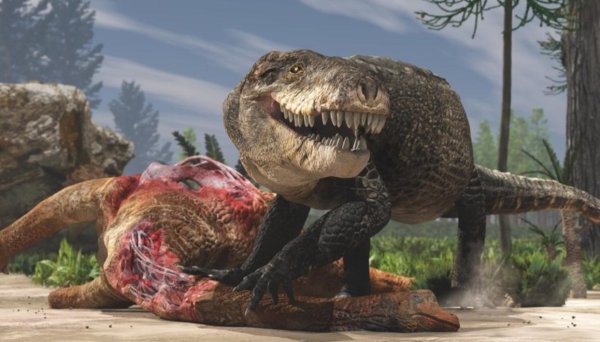 Scientists Discovered a Giant Crocodile With T-Rex Teeth
Next Up: Editor's Pick