Why Cauliflower Is the New 'It' Vegetable

Cauliflower used to be a boring vegetable. When chef Eric Ripert was growing up in France, he saw it as something to buy only when “there was nothing else on the shelf.” Typically perceived as the less colorful, less delicious cousin of broccoli, cauliflower was usually boiled and served plain, as an uninspiring side dish.

That reputation couldn’t be more different today. You can now find the once humble veggie roasted and served like a steak at the Mexican restaurant La Condesa in Austin, or sliced into a sandwich along with eggplant at Bocado in Atlanta. At Le Bernardin, a Michelin-starred French seafood restaurant in New York City, executive chef Ripert thinly carves it and serves it raw as a garnish atop crab cakes.

“Today we see it everywhere,” he says.

Driven by carbo-adverse consumers’ desire for a healthy alternative to white rice and gluten-filled grains, demand for cauliflower has grown steadily over the past few years. U.S. farmers sold $390 million worth of cauliflower in 2016, a steep climb from 2012, when $239 million in cauliflower was sold (and a slight drop from the $402 million in cauliflower sold in 2015, largely due to California’s drought, which hit farms in the state). Grocery stores and vegetable suppliers have taken note of the demand, expanding their lines to include more inventive products, from cauliflower pizza crust to cauliflower tots. Hottest of all is cauliflower “rice,” a grainy substance made by pulsing cauliflower florets in a food processor and lightly cooking the pieces in oil.

Last summer, Whole Foods introduced a 365-branded cauliflower rice to its freezer section. It now ranks at No. 4 in the store’s top 10 frozen vegetables, a list that previously was limited to mainstays like broccoli, peas and spinach, says Jenna Layden, senior buyer for the private label brand at Whole Foods. Cauliflower rice is so popular at Trader Joe’s that the grocery chain recently began enforcing a two-bag limit per customer, rationing it so that there’s enough to go around. When manufacturer B&G acquired Green Giant in 2015, the company immediately expanded its cauliflower line to include three types of cauliflower rice, increasing the amount of the vegetable harvested every week from 5 acres to 35 acres, according to Green Giant VP and general manager Jordan Greenberg.

The versatility of cauliflower has boosted its popularity. It can be mashed and buttered like potatoes, sautéed in spices for a curry or tossed in buffalo sauce and fried to make meatless chicken wings. The more home cooks learn about the creative ways they can prepare cauliflower, the more we’re seeing it on the dinner plate — in a phenomenon similar to Brussels sprouts’ growth about four years ago, says Michael Solmonov, the chef at Zahav, an Israeli restaurant in Philadelphia.

“Back in the day before people caramelized Brussels sprouts, it was synonymous with things people wouldn’t eat,” Solmonov says. “Cauliflower was something people boiled or blanched and shocked and reheated with butter. I don’t have anything against boiling vegetables, but that’s not the way you get people excited about it. Roasting the s–t out of it is exciting.”

That excitement has catapulted cauliflower to entree status for some “veg-forward” chefs who aim to make vegetables, instead of meat, the center of a meal. At abcV, a vegetarian restaurant in New York City, cauliflower comes roasted whole, served with a steak knife, chef Neal Harden says.

“It’s really like the roast in the middle of the table, kind of like how animal proteins would be,” Harden says. “We’re trying to take vegetables that people might have thought were boring and do something a little different with them.”

Cauliflower’s allure can partly be traced to recent low-carb dietary trends. Cauliflower rice contains less than one-eighth the calories of white or brown rice and about one-ninth the carbs. Instead, it’s packed with vitamins C, K and B6 and folate. One small head of cauliflower has more than 125 mg of vitamin C — nearly twice as much as a medium orange.

Cauliflower also fits into a recent trend of old-fashioned vegetables gaining new traction as more people gravitate toward plant-based foods, chefs say. Gina Nucci, director of corporate marketing at Mann’s Packing, a fresh vegetable supplier, points to the recent popularity of beets as an example of “trying to bring back what’s old.” And of course kale, once an afterthought in the vegetable aisle, has enjoyed huge popularity recently in the food world. Nucci sees kohlrabi as the next under-appreciated veggie to be rediscovered.

Ripert, who created his own recipe for cauliflower couscous, which he posted on his website, is placing his bets for the next trendy vegetable on leeks.

“The next vegetable is something we use now probably, that we forgot about, but will come back,” he says. 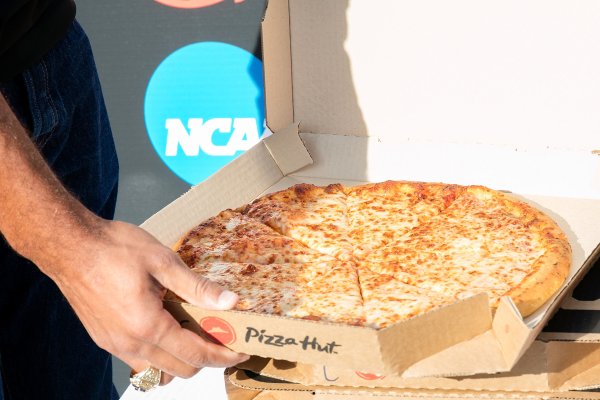 Pizza Hut Is Testing Mac and Cheese Pizza at These Locations
Next Up: Editor's Pick