Move over for a second, Justin Trudeau. Your esteemed assistant is also capturing hearts on the internet.

From a celebratory Pride parade to the latest in-flight entertainment, photos of the Canadian Prime Minister have been a steady source of joy for the internet. But social media recently took a turn when it discovered a new crush on an unsung man: Trudeau’s assistant, Tommy Desfossés.

When political editor Kevin Doyle shared a photo of the assistant hauling quite a few of Trudeau’s things on Twitter, people thought he was looking good. According to the editor, he was carrying gifts for the Prime Minster that included a drum and, of course, socks: a staple of Trudeau’s wardrobe.

Let’s take a look at the facts on the ground. Trudeau’s assistant himself agreed with the editor’s “poor guy” assessment, and got a lot out of the photo.

Trudeau’s friend was all in on the fun with some high praise.

Desfossés and Trudeau’s photographer Adam Scotti exchanged some light ribbing about the photos. Scotti poked fun at Desfossés’ fifteen minutes of fame by producing snapshots of the so-called “tireless” assistant fast asleep on the plane.

And here he was again beside Trudeau catching some rest, as many do on a plane.

He’s not a full-blown internet sensation yet. But give it time. 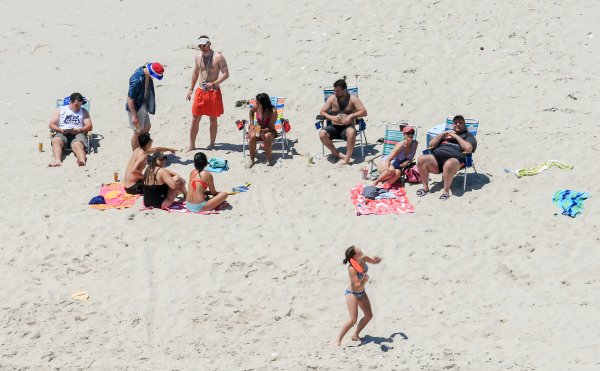 The Internet Had a Lot of Fun With Chris Christie's Beach Outing
Next Up: Editor's Pick