So Far, Online Gambling Revenues Have Been Pathetic

State budget makers and gaming interests have drastically, laughably overestimated the amount of money that would be generated with the advent of legalized online gambling, especially in New Jersey.

In March 2013, New Jersey officials forecast that online gambling would yield somewhere in the neighborhood of $180 million in tax revenues for the state during the first fiscal year Internet gaming was legal. But the estimates have been falling ever since—to $160 million when Christ Christie signed the state budget last summer, and down to just $34 million earlier this year, after a few months of legalized online gambling had passed. More recently, the state treasurer said that no more estimates on online gambling revenues would be made public, which seems wise considering how previous predictions have fared.

From the end of November, when legalized online gambling in New Jersey, through February 2014, a mere $4.2 million in tax revenues has been collected by the state, leading one legislative budget officer to now project an estimate of $12 million in revenues for the year, the Associated Press reported. The revised estimate for next year’s revenues was listed at $48 million. At that pace, it would take four or five years for the state to take in revenues equal to the amount it was supposed to collect in tax revenues during the first year of legal online gambling.

It’s not just state officials who seem mystified by the lackluster returns. Caesars Entertainment recently informed the New Jersey Star-Ledger that its online gaming operation was experiencing decent success in a few parts of the state—Jersey City, Toms River, Cherry Hill—but that it couldn’t explain why interest was strong in some areas and almost nonexistent in others.

New Jersey isn’t the only state that seems to have drastically overestimated online gambling’s potential as a budgetary savior. When Delaware’s gambling sites launched, there were often only a couple dozen players online at any moment, and almost immediately it became apparent that revenues wouldn’t come anywhere near to the first-year estimates. Toward the end of March, Morgan Stanley issued a note regarding longer term prospects for online gambling in the U.S. “We are lowering our estimates to better reflect the insights we have gained following the first few months of operations in New Jersey, Nevada and Delaware,” the note stated, lowering the anticipated gross online gambling spending for 2017 from $5 billion to $3.5 billion, and for 2020 from $9.3 billion to $8 billion.

Toward the end of 2011, mind you, Morgan Stanley was estimating an online gambling market of $14 billion annually, though that was based on broader legalization.

Casino companies give plenty of reasons why online gambling hasn’t taken off in New Jersey and other states, including the continued existence of unregulated (illegal) gambling site competitors, the fact that some banks aren’t allowing their credit cards to be used for placing bets online, and basic lack of awareness among consumers. Surely, some if not all of the factors holding online gambling back can be addressed in time.

That’s assuming legalized online gambling will be around for a while. Sheldon Adelson, the billionaire CEO of the Las Vegas Sands Corp., who obviously has no problem with people gambling in person because he runs casinos, has been waging a war against online gambling for months, at one point penning an op-ed calling Internet gaming “a societal train wreck waiting to happen.” With the backing of Adelson, U.S. Senator Lindsey Graham (R-SC) and Sen. Dianne Feinstein (D-CA) recently sponsored a bill that would effectively outlaw online gambling throughout the country.

A group supported by Adelson, the Coalition to Stop Internet Gambling, has released a series of online ads warning about the risks posed to children and their families in a world where gambling is available on screens 24/7, and it’s not always possible to tell who is using an online account. As the National Journal pointed out, one of the ads shows how a kid with a smartphone can be playing Angry Birds one minute, then be addicted to blackjack the next: 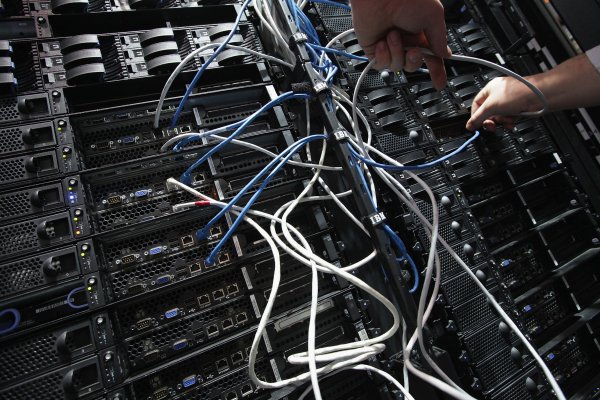 Dirty Clouds: Tech Makes Up 2% of Carbon Emissions
Next Up: Editor's Pick