Anti-Semitism Is Creeping Into Progressivism

Getty Images
Ideas
By Jonathan A. Greenblatt
Greenblatt is CEO and National Director of the Anti-Defamation League.

Last weekend, organizers of a gay pride parade in Chicago ejected three people carrying pride flags emblazoned with a Jewish Star of David. Subsequent bizarre statements attempting to rationalize their action, claiming that Zionism is “an inherently white supremacist ideology” only exacerbated the sense that the organizers were deaf to the concerns of the Jewish community and engaged in anti-Semitism — denying Jews the same rights that were extended to other participants, basically to celebrate their identities as Jewish queer women.

While this incident could be dismissed as one fringe group in one city, the fact is that it does represent a wider school of thought that is fueling a trend of creeping anti-Semitism among some segments of the political left.

Over the past year, we have seen other examples that have raised eyebrows as intersectional intolerance has sprung up among the progressive community. Similar stories to the one in Chicago were reported at the Celebrate Israel Parade in New York City earlier this month.

Last summer, a plank in the platform of the Movement for Black Lives bizarrely accused Israel of genocide.

Linda Sarsour, a leader of the women’s rights movement, has lambasted Zionism as incompatible with feminism and advocates for the exclusion of pro-Israel Jews from activist groups. And some in the anti-Israel movement have accused Israel of “pink-washing,” claiming that Israel and its supporters celebrate freedoms enjoyed by the LGBTQ community in Israel to divert attention from Israel’s treatment of the Palestinians.

For an organization like the Anti-Defamation League, which was founded both to combat anti-Semitism and protect the Jewish people but also to secure justice and fair treatment to all Americans, these manifestations are upsetting. Frustration with particular Israeli policies does not excuse an irrational hatred of Jewish people who support its existence. But this occurs all too frequently, which provides an opportunity to make clear certain moral and practical distinctions.

For starters, the agenda of the civil rights community is the agenda of ADL. We are committed to this work because it is core to our mission.

For example, we do not agree with every tenet in the Black Lives Matter platform. We were outraged by the baseless accusations made against Israel in the M4BL platform released last summer. However, we find common cause with many in the BLM movement around the quest to achieve educational equity, end the school-to-prison pipeline and stop the use of excessive force and the killing of unarmed African Americans by some in law enforcement.

In the case of the Muslim community, we work to combat discriminatory laws such as the Muslim Ban, to call out Islamophobia whenever it happens, such as the recent use of scare tactics to stoke fear that Sharia law is taking over this country and to promote greater understanding of their faith through intergroup work.

And regarding the LGBTQ community, we were proud to stand against discrimination of HIV/AIDS patients decades ago and, more recently, to champion marriage equality. We continue to fight housing and workplace discrimination targeting people based on who they love or how they self-identify their gender. And while great progress has been made in recent years, we continue to resist efforts to turn back the clock under the guise of religious freedom.

On the other hand, when hatred comes from individuals in those very communities or organizations for whom we advocate, we are duty bound to raise our voice. In recent times, anger over specific policies of the Israeli government has been used by some activists to excuse broad anti-Semitism directed at members of the Jewish community. In some cases, we have seen painful rhetoric unfold on college campuses or outright exclusion of self-identified Jews from progressive circles simply because of their faith. All of it is inexcusable.

At ADL, we work with various communities not only because it is the moral thing to do but also because our freedoms are bound to theirs. That said, even as we fight alongside other groups on issues of mutual concern, we should not sacrifice our principles, and we will forcefully denounce those who would slander our community and resort to stereotypes.

This does not mean we need absolute ideological alignment with every prospective partner. But it does mean that we need to draw lines in a clear manner — and demand that our allies observe those fundamental values that we also seek to live by: equality, fairness and respect for all. 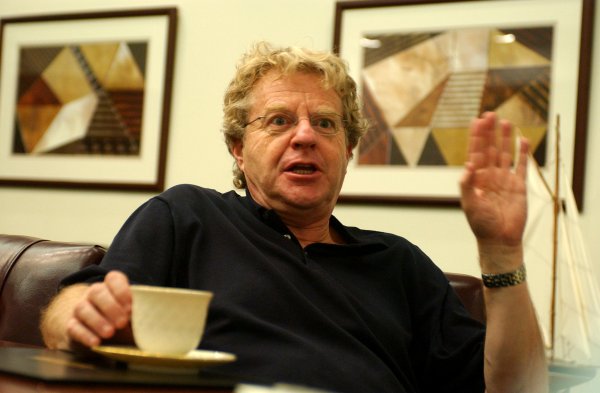 Jerry Springer Weighs In on Trump's Feud With the Morning Joe Hosts
Next Up: Editor's Pick