The War That Started 80 Years Ago Wouldn't Happen Today. We Can Still Learn From It

Picture dated May 1939 of Japanese troops in northern Hebei province, during the Second Japan-China war. The 2nd Japan-China war started in 1937 with the Marco Polo Bridge Incident.
OFF / AFP / Getty Images
By David Kaiser

One of the larger wars in human history broke out 80 years ago Friday, in an armed clash at the Marco Polo Bridge near Beijing between Chinese and Japanese troops. We have many dangers to fear in the world today, and some of them, like tensions between China and its neighbors, parallel the situation in the 1930s. But a glance at the origins and consequences of the incident at the Marco Polo Bridge also makes clear what a different world our parents and grandparents were living in then.

Conflict between China — an ancient empire then suffering from a long decline — and Japan, an island nation that had decided to modernize in the 1860s, had begun in 1894 when Japan attacked China and also secured part of Korea and Taiwan. It had continued during the First World War and afterwards. The Japanese sought full equality with the great powers of the West — especially after defeating Russia in 1904-5 — and by the 1930s were claiming a special role as the leader of Asia. In 1931 they had seized Manchuria, and had begun extending their influence into China. Meanwhile, in China, a new political movement, the Kuomintang, had put an end to the Chinese empire and tried to unify the country under Chiang Kai-shek.

After the First World War, the western powers, led by Britain and the United States, had endorsed the idea of a free, independent and unified China, but Chiang had not really been able to establish such a state. Meanwhile, the Japanese in 1937 had increased their troop presence around Beijing. With no clear boundaries, Chinese and Japanese troops were bound to clash, as they did early in the morning of July 8, 1937. While the initial clash was insignificant, both sides turned it into a test of strength, and full-scale war broke out by the end of the month.

The war, which went on until Japan surrendered to the Allies after Hiroshima and Nagasaki, ranks as one of the most significant wars of the 20th century, if not of all time. Various sources reckon China’s losses at several million killed, and Japan’s at over one million. Since the Vietnam War, the U.S. and other major nations have increasingly relied on air power and high-tech weapons for their security, and such huge armies are a thing of the past. Almost 16 years after 9/11, the total number of U.S. military personnel killed in the Iraq and Afghanistan wars is less than 10,000.

Today’s world differs in another way, too: the world’s major nations are all essentially under the control of their governments. One reason the Sino-Japanese war broke out was the weakness of the Chinese government at the time. This huge war, in the end, did not even solve that problem. The Japanese occupied all the major populated areas along the coast and started to move up the Yangtze Valley, setting up their own puppet Chinese regime, but they could not force Chiang to submit. Frustrated, they expanded in other directions, attacked the U.S. and Great Britain, and lost the war. After Pearl Harbor, Chiang Kai-shek realized that his fate depended on the outcome of the new war between Japan and the U.S., and tried to husband his remaining forces. He found himself theoretically back in control of China after Japan surrendered in 1945, but lost the civil war with the Communists that followed and had to flee to Taiwan in 1949.

As so often happens in history, tensions between Japan and China have revived as leaders born after the last war have taken power. Now it is China that has the strongest military in the region and wants to claim the leadership of the whole Far East, and Japan that is counting on the U.S. for help.

China could possibly fight a limited, regional war to assert new rights over the South China Sea, claim disputed islands and possibly even subdue Taiwan. This is the danger that Harvard political scientist Graham Allison has described in his new book, Destined for War. Faced with that threat, the U.S. would find itself in the position of Britain and France in the 1930s: the leading defender of the status quo, facing threats in both Europe and Asia.

After 1940, when France fell, the U.S. joined with Britain to deal with those threats, and eventually prevailed with massive help from the USSR. Then, Soviet Communism collapsed 46 years after that win. Many U.S. foreign-policy makers appear to cling to the idea that the victory was permanent, and that nothing could or should stand in the way of U.S. beliefs and interests all over the globe. That belief, however, led us into the disastrous fantasy of using military power to install friendly democracies in the Middle East.

Any wars involving Russia or China today will almost inevitably be limited wars, in which the two sides fight for relatively small, regional gains in an effort to establish a new balance that they can live with. The U.S. might able to hold back China in a limited conflict in the Far East, but this time, there will be no armies in the tens of millions, no powerful allies to play the role the USSR played in World War II, and no chance of reducing major enemies to unconditional surrender.

The revulsion against conventional war that began 50 years ago with Vietnam has gone so far that states simply cannot field the kinds of armies they did in the first half of the 20th century. That is a good thing, insofar as it will drastically limit the scale of possible conflicts and the casualties they inflict — as long as the major nations can avoid the use of the other legacy of the Second World War: nuclear weapons. 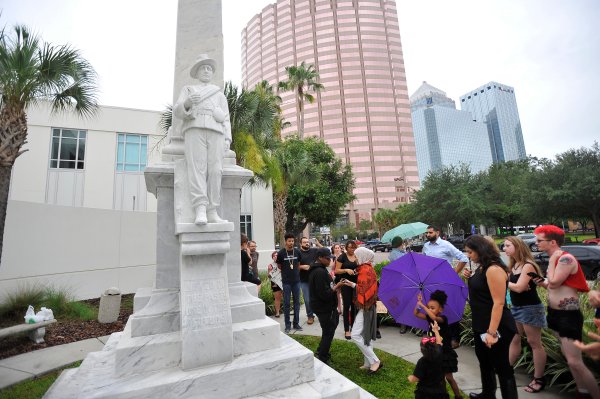 Confederate Monuments and the Forgotten Warning of a Crisis to Come
Next Up: Editor's Pick