A Florida man was jailed for 90 days after police officers in a traffic stop accused him of having cocaine in his car when in fact it was actually drywall powder.

Karlos Cashe, a handyman in Oveido, Fla., was able to leave jail last week after lab results concluded that the powder did not contain any kind of drugs, according to CBS News. Cashe, who is black, blamed the entire incident on racial profiling.

Officers pulled Cashe over because his car’s headlights weren’t on. Footage captured from the officers’ body cameras show Cashe, 57, telling police that he was unaware his headlights were off and apologizing for the misunderstanding, CBS reports.

Officers then asked Cashe if he had any illegal items in the car, who said no. He said he told the officers repeatedly that the drywall they identified in the vehicle was merely drywall.

But the officers proceeded to run a background check and found that he was probation from marijuana and cocaine charges from 2015, according to CBS. Cashe says a K-9 police dog indicated his vehicle had drugs, and an officer’s field test was positive for cocaine.

He was denied bond because he was accused of violating probation, according to court records, CBS reports.

Oveido police said that prosecutors sent the substance to the Florida Department of Law Enforcement for lab testing, according to CBS affiliate WKMG. The results came back on May 16 and showed that the substance was negative for any sort of drug.

Cashe wasn’t released for another month, according to the station.

“I was profiled. It wasn’t the first time, it just was just the worst of those times,” Cashe said. He added that he plans to look into compensation for the three months of work he missed while in jail.

“I was going to jail for something that night, and what it was they decided it would be cocaine,” Cashe said. 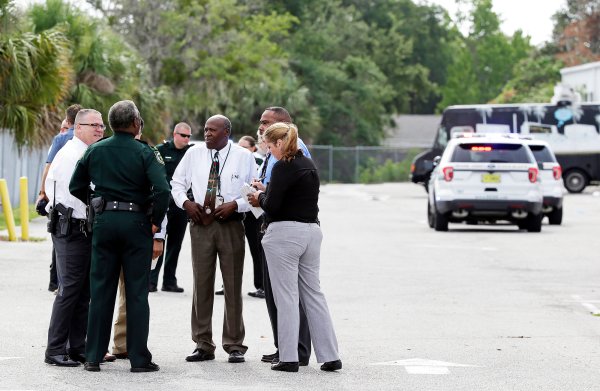 'Disgruntled' Ex-Employee Kills 5 in Orlando Shooting
Next Up: Editor's Pick