The American Health Care System Has Lots of Problems. Here's When They Started

With Senate Republicans planning to introduce a new version of a health care bill on Thursday, in their latest attempt to find a way to fulfill the promise to repeal former President Obama’s signature health care law, it’s as clear as ever that, in the words of President Donald Trump, health care is “so complicated.”

But, while those complications are traced by some to President Obama’s impact on the system or a half-century back to the introduction of Medicare and Medicaid, an even earlier moment is really at the heart of the problem, says Christy Ford Chapin, author of Ensuring America’s Health: The Public Creation of the Corporate Health Care System.

It was in 1938, she argues, that the structural problems with the U.S. health care system began.

In order to understand why 1938 is the key year, it helps to understand how people paid for and thought about health care before that point. Though people had been seeking help from healers since time immemorial, a great deal had changed around the turn of the 20th century. As germ theory became widely accepted, vaccines became more widely used and hospitals became safer, demand for trained and licensed doctors expanded — and so did the influence of regulating bodies like the American Medical Association (AMA).

So, as more people wanted to go to more expensive doctors, they began to get creative. In the years before health insurance was the norm, Americans came up with all kinds of ways to pay for care. Free care at places like charity clinics and dispensaries was sometimes available, and barter was not uncommon. (“The image of the doctor accepting eggs or a pair of boots — that’s very true,” says Chapin.) And doctors often practiced a kind of sliding-scale fee system, in which they treated the poor for very little but expected their wealthier patients to pay more, subsidizing care for the community.

But it wasn’t hard for patients to see that there would be a benefit to figuring out a way to pay smaller amounts more regularly rather than waiting for an emergency — the same logic by which insurance operates today. Mutual-aid societies and union welfare funds often stepped in to provide that kind of service, and some doctors arranged their own multispecialty group practices, some of which allowed patients to pay a set premium for access.

The option that was not available, however, was to pay for service through a large insurance company. Those insurance companies did exist, especially after the tax structure changed in 1913, but the insurers mostly provided group life insurance and pension plans to big businesses. Chapin found in her archival research that such companies did often ask the insurers to cover their employees’ health too — in part as a way to prevent employees from seeing their unions as the providers of wellness — but that the insurers refused, seeing health as a risky and complicated field they were better off without.

Meanwhile, medical authorities like the AMA watched these changes with trepidation. In their view, all of these options — union, physician groups, insurance — were a bad idea. “At that time, the AMA was against health insurance in general,” Chapin explains. “They didn’t want any other agent involved in the physician-patient relationship because they were worried that financier would become more and more powerful and end up reducing the physician’s sovereignty.”

In order to enforce that stance, the AMA threatened doctors with the loss of crucial professional support if they took part in the payment systems that were blossoming at the time. (For example, Chapin says, membership in the medical society affected whether a doctor could obtain malpractice coverage.) By 1938, however, they could see that such a stance was a losing proposition. With the nation in the grips of the Great Depression and President Franklin Roosevelt helping to change American expectations about citizens’ relationship with government, providing for the people’s health seemed to many to be a natural step for government to undertake. As TIME reported in 1938, “Hard times for doctors and patients [and] changing social attitudes have caused doctors to consider new ways of distributing medical care.”

Fearful that the profession would be “federalized,” the doctors’ group finally agreed — to the surprise of many — that some form of insurance was necessary.

But, as Chapin points out, they only agreed to that change on their own specific terms. And, on the idea that big insurance companies were less likely to interfere with doctor sovereignty, it was in 1938 that they picked the insurance model as the only option they would allow, setting out conditions with which the doctors and the insurers would have to comply, like the requirement of a fee-for-service model. Though the insurers had long balked at the idea and predicted that the result would be chaotic, they had little choice when faced with the entire medical establishment as well as the idea that the other option was socialism.

These early insurance policies were “meager, stingy [and] barely covered anything,” Chapin says. A policy, for example, might cover 10 specific diseases and nothing else. But that was enough to set a precedent that the U.S. is still building on today, even though it was problematic from the start. As soon as the insurance companies were in the business of health — and especially as fears of socialism grew in the post-World War II U.S. — they had political reasons to expand coverage in order to prove that private industry was capable of dealing with health, even when the business math didn’t work out and costs quickly ballooned.

Eventually, the insurance-company model started to seem like the obvious choice for Americans — even though the nation had once been full of many alternative models. Chapin, for one, believes that the model of multispecialty group practices with flat fees would likely have prevailed if the American health care market had been allowed to develop on its own without that 1938 decision.

“The basic problem is the role that insurance companies have grown into,” Chapin says. “It wasn’t meant to be that way.” 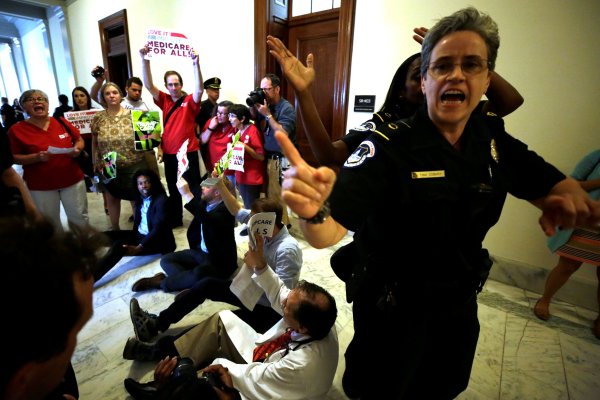 80 People Arrested in Health Care Protests
Next Up: Editor's Pick