For many, France’s Bastille Day, which falls this Friday, is a time to recall that nation’s revolutionary past. After all, the July 14 date is celebrated because of the storming of the Parisian prison that gives the fete its English name (in France it’s known as the Fête National or 14 Juillet).

But, while the French Revolution may call to mind scenes of terror and guillotines, the first anniversary of the 1789 events at the Bastille was marked by revolutionaries, clergy and royals celebrating side by side.

There were only seven people imprisoned at the Bastille in July 1789, and the building – originally built as a fortress in the late 1300s — was actually scheduled for demolition when the mob arrived in search of the gunpowder and arms stored there. Bernard-René de Launay, the Bastille’s governor, negotiated with the revolutionaries but didn’t get very far. Soon enough the clash turned violent, nearly 100 protestors were killed and the prison governor’s head was cut off. In months following, the physical Bastille was demolished and the events of July 14 became a potent symbol of revolution, with citizens rising up against the tyrannical monarchy. That August, the feudal system and tithes were abolished and the Declaration of the Rights of Man enumerated the principles of the revolution.

But by the summer of 1790, France was experiencing relative calm and, for its symbolic value, July 14 seemed like a good day to celebrate the new constitutional monarchy.

In the preceding months there had been spontaneous festivals celebrating the “federation” around the country, and now Paris started planning for the fête de la fédération (festival of the federation) to take place on the Champ de Mars, a field between the Seine and the École Militaire (now home to the Eiffel tower).

Time was short — the National Assembly had only approved the plan in early June — and, after delays and bad weather threatened construction, men, women and children of all classes volunteered to help build an amphitheater alongside hired laborers, who were also constructing a triple triumphal arch, a pavilion and a ceremonial altar. The altar and arch were both decorated with inscriptions to the constitution, as well as to liberty, intellectual achievement, prosperity and the rights of man. While digging and hauling wheelbarrows to level the ground, they sang, notably a new political song, Ça ira, which essentially means “things will work out.”

On the morning of the big day it was chilly and pouring. The Marquis de Lafayette, who had fought in the American Revolution and was at the height of his revolutionary acclaim in France, led a military procession from the Bastille to the chosen spot, where some 300,000 spectators waited despite the rain. Representatives from all of France’s 83 departments marched. Music played. Cannons fired. The royal family arrived. At the altar of the fatherland, Bishop Talleyrand led a mass. Lafayette, the national guard and the national assembly swore fealty to the nation, the law and the King, and to “remain united with all Frenchmen by the indissoluble bonds of brotherhood.” In turn, King Louis XVI swore to uphold the as-yet-unfinished constitution. The crowd cheered as Marie Antoinette held up the dauphin, their heir.

Observers were enthralled. One described the crowd as “animated in the same spirit, from the same intention, swearing as one people” and the spirit they felt as “the surest guarantor of our felicity, and the reality of our regeneration.” The Gentleman’s Magazine wrote that the number of people “baffled the eye to reckon. Their shouts rent the skies, when, in the enthusiasm of joy, they mingled the acclamations of rapture with the effusions of piety” yet “decorum, order, peace and concord reigned through the immense multitude.” According to historian Lynn Hunt, a conservative newspaper called L’Ami du Roi wrote that the celebration of “the innate love in the hearts of all French people for the person of the king and for the royal family” was part of “the most astonishing epoch in our history.”

Across France, towns had been instructed to have their own festivals at the same time. Some skipped the celebrations or only held perfunctory oaths, but others celebrated with their own altars and military parades, food and drink, dancing, playing cards, even incorporating local baptisms and marriages into the ceremony. In one town 83 women dressed up as the 83 departments.

When the formal ceremony ended, celebrations in Paris continued and lasted for days, with fireworks, banquets, balls, feasting on food and drink, dancing at the site of the Bastille (whose ruins were transformed into a festive scene) and even a failed launch of a “superb [hot air] balloon in the colors of the nation.”

Just over a year later, on July 17, 1791, the national guards opened fire at protesters at the very same spot where the 1790 celebration had been held, killing 50. In 1793, the King and Queen were executed. But for a moment, the festival symbolized a hope of moving forward in fraternity — a hope that was reaffirmed in 1880, nearly a century later, when Bastille Day became an official holiday. 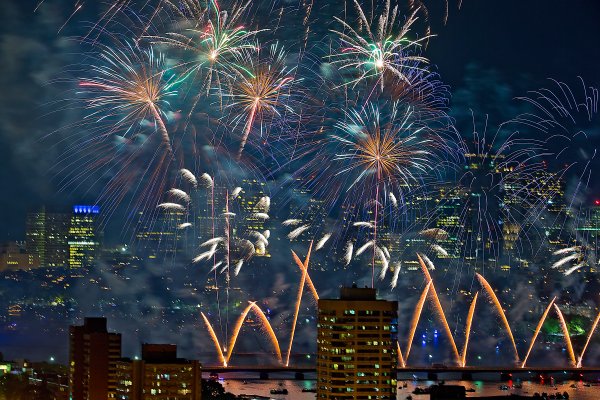 How Fireworks Became a Fourth of July Tradition
Next Up: Editor's Pick